I had it all worked out.  My company asked everyone to wear purple on Friday.  Naturally, I wore Steelers stuff.

They were all “It’s Purple Friday.”

I guess the joke’s on me.  The Ratbirds mopped up the floor with the Patriots this afternoon, waxing them 33-14 up in their house.

It figures, the one time I root for the Belichick Patriots, they go and screw the pooch.  Not that I don’t get a secret thrill out of that… With all due respect to my New Englander friends at The Guys Perspective, I can’ stand the Patriots… not as badly as I hate the Ratbirds, but close.

Most of that has to do with their beating my boys in those AFC Championship games, especially the one I attended in January 2005… the one I froze my butt off when it was 11 degrees at kickoff.  And then we find out they were cheating to do it?  The Ravens may play undisciplined football and take a few too many cheap-shots, but I’m unaware of their ever having brazenly flouted NFL rules.

So I’m not too terribly torn up about the Pats taking a beat down.  I know the Rats are going down when they face the Colts in Indy next week.  And if they don’t, it’s going to be a rough couple of weeks for me, because I think the Ratbirds can handle either San Diego or the Jets.  So if the Colts don’t win, I see Baltimore in the Super Bowl.

At least the Bengals went down in flames.  I was pretty sure they were over rated and playing over their head, but I did think they would squeak by the Jets and then lose in the next round.  But apparently their Peter Principle level for the playoffs is the opening round.

Worst case scenario for me, the Ratbirds face the Cowboys.  Talk about football’s Sophie’s Choice… Can’t root for the Rats and if the Cowboys win, they tie the Steelers for most Super Bowls.  That just can’t be allowed to happen.  I just may be the first person to watch the Super Bowl via DVR, zap all the football and watch all the commercials.

I’d just have to do like my dad taught me back in the 70’s when we’d watch the Browns/Bengals game and either outcome would not affect the Steelers:  root for a 0-0 tie with lots of career-ending injuries.

Just call me the Poster Boy for Schadenfreude. 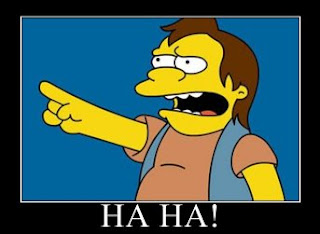 In the NFC, for what it’s worth, I’m rooting for Green Bay and New Orleans.  The Packers have always been my favorite NFC team.  As for the Saints, it’s just that they haven’t won jack since, well, ever.  It’s always good to see new blood in the Super Bowl.  I would root for the Cardinals too, because of all the ex-Steelers connections, but as they’re playing the Pack right off the bat, that’s off the table.  But if they win, they I’d put them right after the Saints.

Meanwhile, I’ll have to hide out in the Darwinfish Mojo Laboratories and cook up a nasty karmic cocktail to prevent any more Ratbird advancement… anything to avoid a Purple Reign.