Last September, I had just finished watching Season 3 of “24” on DVD and decided to dip my toe into the lucrative Drinking Game market.  In about 20 minutes, I scratched out this post for my 24 Drinking Game.

I didn’t get many eyeballs on this post, per usual, but I did notice that it would turn up regularly in Google searches… at least a couple per week since then.

But this year, it’s suddenly gone off the scale (by my humble standards).  Since 1/6, I’ve had 50 hits from Google on this post, obviously due to the run-up to yesterday’s premiere of “24”-Season 8.  The vast majority of them were from the last 5 days.  At least a third of them were from England and another third from other places in Europe.  Either they really enjoy Jack Bauer in the Olde Country, or they’re just looking for a new way to get drunk.

But not one of them has commented.  Humph! 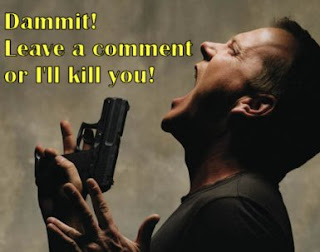 Last night I figured I’d have a look at the how the Game stacks up in Season 8.  Normally the series doesn’t really get cooking until at least a couple episodes in, so I wasn’t expecting a lot of hits.  I was actually pleasantly surprised.

So in the 2-hour premiere there were 8 drinking points by my count.  Some of them are judgment calls, especially when it comes to Chloe.  Everything she says is “awkward” and a scowl is her default expression.  I was awarding a drink for anything beyond the normal awkward scowl.

I was pleasantly surprised by the “Dammit” count and the early appearance of “We don’t have a choice”.  Fast out of the gate, this season…

Or I’ll send Jack Bauer to hunt you down and beat it out of you.
Posted by bluzdude at 7:37 PM