Keep Me In Your Heart


A lot of people have never heard of Warren Zevon.  Most that do know only his song “Werewolves of London.”  But more discerning music fans know Zevon has a long trail of albums that span from the early 70’s through 2003.  Some songs were harsh, some were melodic, some were funny and many were very dark.  He was kind of an acquired taste.
He had a brief renaissance in the mid 80’s, but most of his catalog barely registered on the sales charts.  You really had to seek out his music if you wanted to hear it.

In 2002, Zevon was diagnosed with an inoperable lung cancer and given 6 months to live.  He immediately went into the recording studio and began writing songs and working on what would be his final and best album, “The Wind.”
I didn’t know about any of this at the time.  I’d heard on the news that he’d died, but that was it. 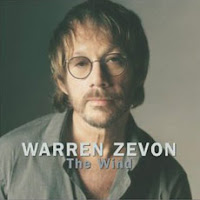 Sometime in 2004, I was sitting around flipping channels and I came across a VH-1 special about Zevon’s last album.  It seems that once the word got out that Zevon’s final project, his music business buddies showed up en masse to contribute to the album.   Bruce Springsteen, Don Henley, Joe Walsh, Timothy B. Schmidt, Billy Bob Thornton, Dwight Yoakum, Tommy Shaw, Emmylou Harris, Tom Petty, Jackson Brown, David Lindley and Jim Keltner all came to sing, play and say their goodbyes.
The show was just fascinating, as it chronicled not only the creation of the album but the last months of Warren Zevon.  He was given 6 months to live, but he lived 6 months past that, working on his project the whole time.  He lived just long enough to see the birth of his twin grandsons.
The music itself was incredible, exploring the spectrum of emotion as one expires.  The whole special was just wrenching to watch (when it wasn’t hilarious).  When it was over, I logged into Amazon.com immediately to buy the CD.  And the day that VH-1 special became a DVD, I got that too.
So why am I talking about Warren Zevon and “The Wind” today?  The answer is my previous post.  It was my buddy Brill that turned me onto Zevon back when we were in high school.  In my mind, Brill and Zevon are intertwined.  I wasn’t there for Brill’s last days, but I could watch Zevon’s.
There was one song that was especially affecting.  “Keep Me in Your Heart” was the first song he wrote for “The Wind” but the last one recorded.  He sang it in his living room, on the couch, because he was too weak to make it out to the studio.  I always imagine it as being from Brill, to the wife he left behind.  It took months before I could listen to the song without choking up.
During the time of his illness, Zevon went on the Letterman show for one last performance and in the course of their conversation with his old friend, he said that one of the things he’d learned by having a fixed amount of time left, is you had to “enjoy every sandwich”.
After Zevon’s death, a number of his friends came together and recorded a tribute album of his songs, and that was the title:  “Enjoy Every Sandwich: The Songs of Warren Zevon.”
Through this post and the last, I guess that’s what I’m trying to say.  We never know what’s around the corner.  Let your loved ones know what they mean to you, and find the joy in your life as your travel through it.  In other words, enjoy every sandwich. 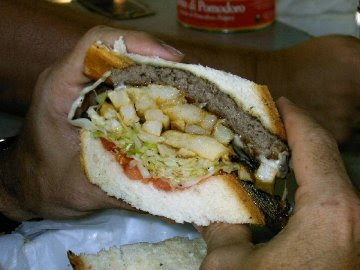 Now, as of the next post, I’ll be done with this depressing stuff and will resume my customary jockularity.
Posted by bluzdude at 7:52 PM