OK, this is a warning to any family or relatives… Skip this post.  Just trust me.  X out and come back for the next one.  Unless you really want to read about your son/brother/nephew/cousin making the Beast With Two Backs, just move along.  What once has been read can never be unread.  You’ve been warned.

As you may have read in the previous two posts, I moved into my first apartment after I graduated college.  I moved in with my girlfriend and a mutual female friend, who I’ll call “Diane.”  I’ll tell you why I’m calling her that in a bit.

I met Diane when I was a sophomore.  We were both taking the same radio classes, so we often worked together doing production work.  (And that’s production, not reproduction.)  I had a huge crush on her right off the bat.

Diane was a pretty blond with an hourglass figure… narrow waist and round in all the right places.  She always looked great… she dressed well, nice hair and makeup, the whole bit.  She was smart, fun, and funny.  She was also very sexually adventurous.  She made no bones about loving sex and whenever she wanted it, she just went out and got some.  No excuses, no regrets.

I totally wanted some of that.

But I saw that she was always going for those jocky, cocky, Type-A personality guys, of which I was most definitely not.  I was still very shy, and only just starting to come out of my shell.  But while I may have been doing more showy things like radio work and hosting talent shows and stuff, I was still very shy and unsure about getting with the ladies.  I had no game whatsoever.

It turned out that we ate the cheese, drank the wine, and worked on our assignment; that was it.  It was fun, but not what I’d hoped for.  I think I tried to ask her out that night, or shortly thereafter, but she kind of gave me the brush.  Meanwhile, she continued to see her rotating cast of jocks and Type-A pretty-boys.  We remained friends and continued to work together.  She’d sit in on my radio show and I’d guest on hers.  She was a member of the cast for the radio soap opera spoof I wrote.

So going into this apartment, I had no reason to worry about straying from my girlfriend.  This was especially true after I got to see how she actually lived.  For someone that was always so well put-together in public, she was a mess at home.  Her younger brother, I learned, nicknamed her “Grubby.”  It fit.  But no matter.  If you can’t relax at home, what’s the point?  But what I’m saying is that I wasn’t exactly following her around the house.

I call her “Diane” now because while she was fun to hang with, she also had this pretentious streak that reminds me of Shelly Long’s character from “Cheers,” Diane Chambers. 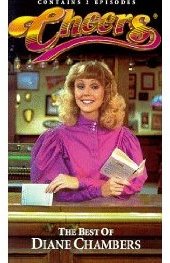 She loved talking about things for the sole purpose of letting you know that she knew all about them and you didn’t.  It could be very irritating.  But it’s the kind of thing a guy can overlook when the girl is all hot and stuff.

One of her troubles there was that while she was in graduate school, her stream of boy-toys seemed to dry up.  At one point, I introduced her to my best buddy, Brill.  (He was most definitely NOT a jock or Type-A personality.  He was a lot like me, only scrawnier.)  They dated for a while and all was well.  OK, except when they were having all the loud sex, because we shared a bedroom wall.  I remember one night, after they wrapped up a particularly boisterous episode, the Girlfriend and I sat up in our own bed and gave them a round of applause.  Diane was pissed, but Brill came out and took a bow.  We threatened that the next time, we’d burst in and hold up score cards: 5.8… 5.6… 6.0…

The next problem was that Brill got tired of the 40-minute drive to come see her.  I tried to reason with him… telling him that I made that drive every freakin’ day for 4 years, and I wasn’t even getting laid!  How bad could the drive possibly be??

But Brill was unswayed and they kind of drifted apart after that.  While they were drifting, my other buddy Rik started coming around some.  One night, we knew that he spent the night in her room.  The Girlfriend was all pissed off because she didn’t like Rik and thought he was butting in on Brill.

In actuality, they had spent the night talking.  But then later, another time, they figured that if they were going to catch all the hell about sleeping together, they might as well sleep together.

Meanwhile, our life trundled on.  I got Diane a job at my record store, so most days we would commute together.  After work, we’d come home, crack some wine and adjourn to her room to hang out on her big waterbed.  When the Girlfriend turned up, she’d join us as well.  It was never an issue that we were “in bed.”  The waterbed was much more comfortable than our second-hand furniture in the living room.

Like I said in the last post, the Girlfriend and I decided to split up in early June.  And since she was paid up through the end of the lease in August, I said she should just stay until the end, since we all still got along.  We still slept in the same bed, but that was all that was happening in there.

One night, Diane was complaining about getting a sunburn on her back and asked me to put some lotion it.  I went into her room, she laid down on the bed with her arms up under her pillow and I hopped up onto her butt and rubbed in the lotion.  One thing I learned in college was how to give a good back rub, so it became more of a rub down than just spreading lotion.  A couple of times, I’d let my hands kind of dangle around the side, for a little side-boob action, just to judge her response.  She really seemed to be enjoying it and I definitely noticed.  The Ex-Girlfriend was still over there our bed, so I was certainly not going to start anything.  But it did send my mind spinning.

The next afternoon, when I got home from work, the Ex-Girlfriend was out at theater rehearsal and Diane was in her bedroom.  I changed into my shorts, without bothering putting a shirt on, which was normal for me in the summer.  Diane called me in to put some more lotion on her back.

Again, she lay face-down on the bed and unfastened her top.  I sat on her behind and began rubbing in the lotion with long strokes.  I gave her some of my best work.  My massages usually go one of two ways… either the massagee gets all turned on or falls asleep.

As I warmed the next application of lotion in my hands, I wondered which way this one would go.  As I began to work in the lotion, I noticed that she began rolling her hips in time with each stroke.  That set off the alarms in my head and all systems went to red alert.

Now a conversation began between the two little guys on my shoulder, Horndog Bluz and Shy Bluz:

HB: Dude!  Do you feel that?  She’s rubbing her ass against you!  She wants it!

SB: But what if I make a move and she freaks out?  It’ll be really awkward.  I’ll never be able to face her again.

HB: You’ll think of something…

I began working the side-boob maneuver again.  Her hip action increased.  The time was right.  I gave a couple more long, slow strokes all the way up to her neck and on the last one, I leaned in and lightly kissed the back of her neck.

I’ll tell you the rest, tomorrow.

When I kissed her neck, she promptly spun around onto her back, revealing her naked, shapely self, and kissed me square on the mouth.

Jackpot!  Or should I say, “Honeypot!”

We spent the rest of the afternoon ravaging each other like crazed weasels.  I couldn’t believe my good fortune… this hot chick, the one I’d been sweet on for so long was finally rewarding me for my years of patience.  Halle-fucking-luiah!  It may not have been a "Come to Jesus" moment, but we sure came somewhere.

Afterward, we considered whether we should say anything to the Ex-Girlfriend.  I knew it would cause nothing but drama because she would immediately assume we were banging each other the entire time we lived there, if not longer.  She would NOT take this well.  We didn’t see how any good would come from full disclosure, so to keep things peaceful in the house, we figured we’d keep things on the down-low.

...And I will tell you all about them in the next post because this one has gone on long enough.
Posted by bluzdude at 11:10 AM