Back in 1998, having just moved to Baltimore, I got myself a job where I had nothing to do for 2 weeks.  They didn’t have their business license yet, so I was prohibited from doing anything... businessy.  But I did have a computer on my desk that had this program on it that was new to me, called “Windows.”  (Really, I had never even used a mouse before then.)
To teach myself “Excel”, I made spreadsheets of my hockey stats.  And in order to help me learn “Word”, I decided to write my musical memoirs before the details began to fade.
I’ve always intended to include this material on Darwinfish; it was just a matter of waiting for the right time.
Welcome to the right time.  In the next series of posts, I’m going to excerpt that document and attempt to regale you with the tales of my star-struck youth.  With that, may I present “Brushes With the Great and the Near Great.”
Getting My Feet Wet-The Toledo Years
For a large portion of my life, I have been blessed with the opportunity to meet and sometimes get to know some of the brightest stars of the recording business.  I’ve had the same opportunity to meet the “also-rans”, “the-never-quite-got-theres”, and some “got-there-but-left-then-came-backs”.  Most were nice, some were squirrelly, none were mean and a few were out of this world. 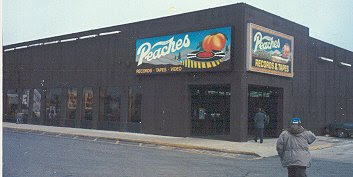 This is the record store at which I started, Peaches in Maumee, OH.  It was huge... you could have had a bowling alley in that space.
I got to meet these people as an offshoot of a 13-year career in music retail.  When I started out at Peaches Records, we were still selling 8-tracks, with vinyl records dominating and cassettes just gaining acceptance. When I left, CDs were the dominant format, with Digital Audio Tape and MiniDisks trying to emerge.  In that span, I went from part-time clerk, to assistant manager, to store manager, to home office clerk, to product buyer, back to store manager and then out.  I guess I ran along the same cycle as many of the stars I admired. I got into the business for the sheer love of the music.  With the same job demands in any other field of retail, I’d have quit the business long before I actually did.  But it was constant exposure to the music, and learning to like music styles I’d never heard before that kept me around.  And meeting the people that make the music was the highlight of it all. 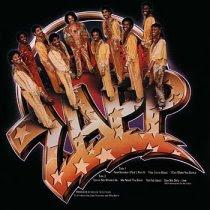 I suppose my first clues into the electricity of showbiz, came with my first encounters with in-store appearances.  My first was an R&B group called Zapp.  I was definitely not a fan, as I found their album extremely annoying.  Why they were doing this in-store in Toledo was beyond me, as our soul section (as it was called then) business was not high.  The crowd was sparse when they rolled in, but boy, did that band make an entrance.
Every one of them (about 7 or 8 in all) was dressed to the nines, wearing snappy suits, full-length coats, and fedoras. They had all the smooth moves too. The group leader, Roger Troutman, would accept a kiss on the cheek, and then wipe it with his finger and pop it in his mouth.  I found them all a little arrogant, what with their intermittent bellowing for their favorite album tracks to be played.  But you couldn’t miss the star power. 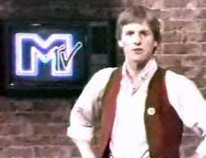 The next in-store proved to be chaotic.  A “Vee-Jay” from this fledgling network called MTV, packed in at least 500 screaming, greedy little kids.  The VJ was Alan Hunter, one of the original 5 MTV stars that ushered in the era of music video.  We had no idea what to expect, as we set up a little banquet table near the back of the store, but as his arrival approached, the store became mobbed.  We kept him in the back room, wondering what to do.  Eventually, someone had the brilliant idea to have him go outside and around to the front, and scoot behind the tape counter that ran the length of the store.  There, we could post two sturdy men at either end, (I was one) and Alan could go up and down the counter to sign and schmooze, with a 2 foot deep counter between him and his admiring crush of pre and post-pubescents.

He had just a handful of MTV buttons to give out, (after having already greased the store personnel) but all they did was drive the youngsters into an frenzy.  My friend Kenny “The Viking” helped somewhat, as he dug out a bag of Peaches staff buttons to give out.
This Hunter guy was tireless, endlessly cheerful and accommodated all that came.  When he finally retreated to the back room at the end of the event, he seemed to burst with manic joy.
“Now I can say ‘shit’, now I can say ‘fuck’!” he exclaimed.  I guess the pressures of constant perkiness can get to anyone.
My first actual rock concert schmoozing experience was with the Scorpions, which I already wrote about in January, so I’ll skip it here.
My next experience backstage includes my only real gaffe, the one my friend Kenny the Viking never let me live down.
We got tickets and passes to see Black Sabbath with Quiet Riot opening, at the Joe Louis Arena in Detroit.  I wasn’t a big Sabbath fan and was mainly interested in seeing Quiet Riot, who was just breaking big with "Metal Health" and that “Bang Your Head” thing.  Sabbath was touring on Born Again, the album with a one-time lineup featuring Ian Gillan of Deep Purple on vocals, and Bev Bevan from ELO on drums.  It was the latter that got me into trouble. 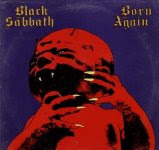 Black Sabbath’s was the first real show I’d seen.  They opened out to a smoky Stonehenge-like set, with this creepy little devil-baby laughing and capering around in the mist, before each band member stepped out from their own doors in the stone.  It was really something.  Later, as we wandered backstage, we saw both the Styrofoam stone mockups, and the Little Person that dressed in the devil-baby outfit.  (A red devil-baby graced the cover of Sabbath’s most recent album.)
Anyway, we met Quiet Riot’s drummer and then I found a pre-autographed QR album flat*, before we met Black Sabbath.  I got Ian Gillan’s autograph without incident and stepped up to meet Bev, former drummer for a long time favorite band.  As he signed, I told him I had looked forward to meeting him because I really admired his work with ELO.  He favored me with a look of disgust wrapped in a blanket of horror, as if I’d just asked him if he’d mind if I stuck my finger in his nose, just up to the third knuckle.  He turned away without a word.  I was horrified at myself, but it wouldn’t have been so bad, had I not known that Kenny was right there watching.  He busted my balls all the way back to Toledo.  How was I to know there was bad blood? The concert program said Bev was on loan from ELO.
But Ken never let me forget about The Time I Insulted Bev Bevan.
* An "album flat" is a 12" x 12" piece of cardboard with album art on it.  It was used in making displays in record stores.
Posted by bluzdude at 6:49 PM