I had so much fun posting last week about the hypothetical sitcom I want to create about my friend Kelly.  That post also had a link to an earlier situation that came from our sitcom-idea document, that talked about her longstanding wish to kidnap Penguins defenseman Kris Letang and keep him in the Silence of the Lambs pit she wants to dig in her basement. 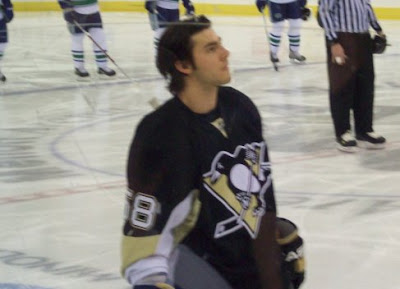 This is a shot I took of Letang (or “Le Unicorn” as he’s sometimes called by the ladies) in 2008, as the Anthem was finishing up.  So you can see why “Kelly” thinks he’s “pit-worthy.”
Then I found an old email thread in which we came up with another episode idea.  I thought I’d get another cheap post out of it share it with you today.
The email started with us discussing an online video of the Penguins doing a charity bowling event, followed by the house warming party she was planning for the weekend, which was being threatened by yet another massive snowstorm.  She’d already cancelled one a couple of weeks earlier, for the same reason.
Bluz: I totally want one of those bowling shirts.  It they’re smart, they’ll be marketing them on NHL.com.
Kelly: I'll be sure to grab you one out of the closet of whomever I spend the night with...
Bluz: L. O. F’n. L.
You just made me have to clamp my hands over my mouth.  I think I burst an eardrum.
Do you purposely schedule your parties for bad weather?
Kelly: It’s a test of my friends’ true friendship…
Nothing’s going to happen.  It’s too soon to know for sure.  If I have to sit by myself and eat a whole pan of baked ziti and drink a whole case of wine…  gosh darnit, I will!!  I’m having this party, even if it’s only me.  Screw the weather and the weatherman!!!
Bluz: You know, that sounds like an episode.
I know, it’s too far out for them to have the forecast pinned down… But that’s not stopping them from the Traditional Pre-Storm Hype:
HERE COMES THE KILLER DEATH SNOW… TAKE PRECAUTIONS… LOOT THE SUPERMARKET… TAKE SHELTER IN THE STORM CELLAR!!!.  (Or in your case, the Wine Cellar.  Or the Pit.)
Bluz (again): Just added this to the sitcom document:

“You Gotta Fight (For Your Right to Party)” – Kelly keeps trying to throw a housewarming party and it always ends up on the same night as some kind of weather-related disaster.  She finally commits to having one no matter what and of course there’s a blizzard.  Must include scene with Kelly sitting on the floor alone, surrounded by empty wine bottles with pasta in her hair, spooning ziti directly from the pan.  Her cats are sitting around her, wearing tiny little party hats.  Party music is playing.  Wii Bowling is set up on the TV… you can see her name as a player, with 3 other names on the scoreboard reading Someone, No one, and Kris Letang.

Or maybe Letang is still in The Pit, shown yelling, “Can I have some ziti?”
(Every episode has a title taken from a 1980’s or 90’s song.)
Kelly: I love the part with Kris Letang in The Pit yelling “can I have some ziti?”  Cracks me up!!
Bluz: OK, I’ll add that… I only thought of it when I wrote the email.
Question though… if he’s in The Pit, would she still have his name on the Wii?
Eh, probably…
It would make it funnier if, even though she had the guy in the basement, she’s still “daydreaming” about him…
Kelly: When it was his turn to bowl – “Kelly” will yell down to The Pit – “It’s your turn.  I’ll bowl for you.  You got a strike.” And I’ll do an air high-5 in the direction of The Pit.
Bluz: Beautiful… I know just how to frame it…
You see “Kelly” saying “It’s your turn… I’ll bowl for you.”
Then you see the look on his face, down in The Pit, and hear “Kelly” say, “You got a strike.”
Back to her for the high five.
I see a graphic during the end credits, “No hockey players were actually kidnapped during the production of this show.  Yet.”
Kelly: This brilliance needs to be shared with the world!!
OK, this is probably all the exposure it’s ever going to get.  Isn’t the creative process fascinating?
March Madness
The NCAA tournament is in full swing.  Me… I’m not really into college basketball.  I may get mildly interested around the Final Four.  But for the most part, this is my kind of March Madness:

This was always one of my favorite videos.  It looks like it was shot for about $75, but still kills.  I use this tune as an eraser, too.
You know how sometimes you get a song stuck in your head and can’t get it out?  I hate that, especially if it’s a song I don’t like, or worse, a commercial jingle.  When that happens, I use an “eraser”.  That’s what I call a song I forcibly jam in there and concentrate on, to remove the previous earworm.
Granted, that song is then stuck in my head, but at least it’s an upgrade.
Posted by bluzdude at 5:36 PM