This is another installment from the musical memoir I wrote in 1998 (and have been tweaking ever since), called “Brushes with the Great and Near Great,” chronicling some of the famous folk I got to meet during my 13-year career in music retail.  Today’s story covers the change from managing stores in Cleveland to joining the company HQ in Albany, where the schmoozing went to a whole new level.

CORPORATE SCHMOOZING: THE ALBANY YEARS
Leaving Cleveland meant leaving behind my being a reasonably big fish.  I was just a minnow in Albany, not because it was some kind of big music town, but that as the home of my company’s corporate office, all the perks went to the buyers and executives.  We store level folk were pretty much irrelevant, next to those with the power to buy and distribute tens of thousands of pieces of a given title.

My only chance to continue to rub up against the rich and famous was to break into corporate, and become a big wheel myself.  (Or at least a training wheel.)

I accomplished this in October of 1991, joining the merchandising staff under our music buyer, Dave.  I was given, for tutelage, to Vinnie, schmoozemeister par excellence, who was not only the singles buyer, he was The Man when it came to connections.  Vinnie used to be a concert promoter and at one time owned a notable Albany nightclub, JB Scott’s.  (Which had since burned down.)  He not only knew all the artists, but more importantly, he knew their managers.  In other words, he handled the ones that handled the stars.  And he got to know them way back when, before the stars were stars.  Bryan Adams, U2, The Police, The Pretenders and bands like that, all played JB Scott’s on their first US tours.

Every so often, Vinnie would get a bee in his bonnet about something, and go to see the CEO, with fire in his eyes and a resignation on his lips.  The CEO always managed to put out the fire, though.  He’d get him some more money, or autonomy, or whatever Vinnie needed, and then things would be fine.  I think he realized that Vinnie was the one guy that absolutely not be replaced.  Vinnie had his fingers in so many parts of the company pie, it’d have deflated if they were all removed.  I also think that Vinnie had been around so long, he knew where all of the bodies were buried, so to speak, and wouldn’t be squeamish about digging them up.

Vinnie used to take a lot of shit from people for being a short, loud guy from Brooklyn.  Until someone wanted tickets, that is, with which Vinnie always came across.  But no one ever said he didn’t have a big heart, and what ever happened, it was always “just business.”  I’d hear him curse some salesman up one side and down the other and then arrange to meet for drinks after work.

Of course, Vinnie wasn’t the only guy that knew people.  My boss, Dave, had many connections, especially in country music and this brought a great many up and coming country singers, as well as established stars, into the office.  We had boardroom lunches with Larry Stewart, Lee Roy Parnell, Lisa Stewart, The Remingtons, and Pam Tillis.  As a member of the merchandising staff, I was always invited to go.  And it doesn’t matter if you know of the person or group.  You never knew who was going to make it big. 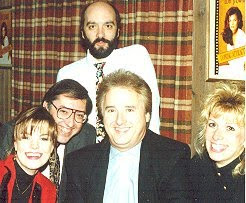 Lisa Stewart, Vinnie, Me, Dave, and my friend Lisa at a listening party for Lisa Stewart's new record.

Secondly, and most importantly, in the field as well as in the office, you never turned down a free lunch.

Reba McEntire stopped by with her husband/manager, late one Friday night, just to say hi to Dave.  She looked terrific in her buckskin jacket with the fringe and matching pants, and was very friendly, shaking hands with everyone who was still around.  Somehow, I found the power to resist suggesting that she call her next album, “Andele”, so that the album jacket could say, “Reba!  Andele!”  (If you don’t see the humor in that, you must never have seen “Speedy Gonzalez” on Saturday mornings.)

I found that star for star; the country music people are the nicest to be around.  They really know how to treat their fans and always seem to go above and beyond what’s necessary.  And that’s not just the newcomers.  The superstars are the same way.
This was visibly demonstrated to me by the office appearance of Garth Brooks.  At this time, he was just reaching the height of his popularity, and releasing, “The Chase”, his 4th album, when he came to visit.

They had him sit in the boardroom and everyone lined up out the door the meet him.  You’d walk up and he’d stand up and shake your hand, then sit back down and sign whatever you wanted.  When you were done the next would come up and he’d stand up again and so on.  God only knows how many times he was up and down that day.  Then he was taken on a tour around to all the office departments and shook hands and signed for all comers.

Eventually, his people wanted him to get a move on, before he was done meeting everyone.  Garth asked that we get him the names of everyone that didn’t get an autograph, two weeks later, I’ll be damned if a whole stack of personalized autographs weren’t delivered.  This was off the chart, for a person of his stature and it made me into a genuine Garth Brooks fan.  I guess that’s how it was meant to work. 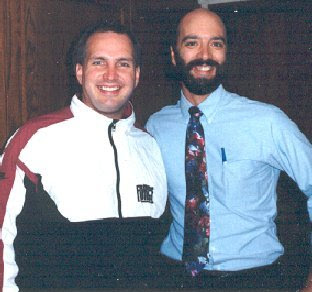 I also got to meet Randy Travis, when he came into the office.  I was surprised how small he was.  Very nice guy, though. 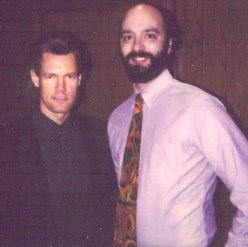 OK, he doesn't LOOK that small, but remember, he's got heels on his cowboy boots..

One day, we merchants were to go to a local Red Lobster for a lunch with the pop-dance group Exposé.   (Apparently Howard Johnson’s was unavailable.)  Unfortunately, everyone was too busy to go, so I was sent as an emissary, which I was only too happy to be.  Remember, free lunch and special added bonus, the girls of Exposé are hot.   I’d seen them at Peabody’s years before and they put on an entertaining show.  I was especially fond of the blonde one, Ann Curless, and I somehow managed to grab a seat beside her at lunch.  Had a charming conversation with her, but all I really remember is that she was also from Ohio.  I had a ball posing for pictures, arm in arm with three beautiful ladies.  Tough job. 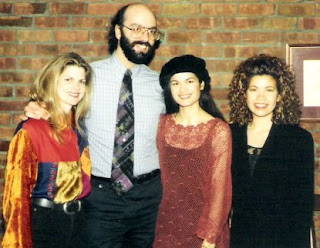 Ann Curless, me, Kelly Moneymaker and Jeanette Jurado.  If I were any happier at that moment, I wouldn't be able to publish this photo.

As it turned out, they were coming back to the office anyway, so I got to function as an unofficial ambassador and guide.  It was fun though, and at one point, Jeanette Jurado held out my camera and tried to take a picture of the both of us together.  Too bad that she only succeeded in taking one of my enormous head, beside a little sliver of hers.

“Gee thanks…just the shot I want to blow up and frame.”  (No, I’m not posting that shot.  Here’s a much nicer one instead.) 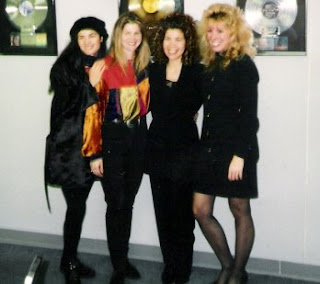 Expose, posing at our office with my friend Lisa. All right, it would have been nicer if it was in better focus.

We had an office listening for a dance group called The Party.  Their promotional kit showed them looking like some very hip, stylish young adults, but the kids that showed up looked like they just got off the school bus.  They were babies!  They looked like sophomores or juniors in high school. 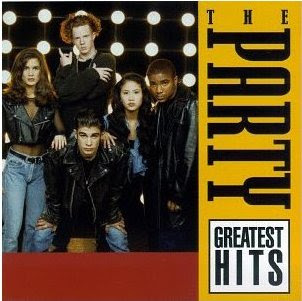 Why weren't these kids in school?

And this was before the field trip really started, when we showed them around the warehouse.  They were pretty interested in how it all works, and I couldn’t blame them.  I was pretty tripped by it all when I first started.  I always thought our warehouse looked like the one at the end of Raiders of the Lost Ark. 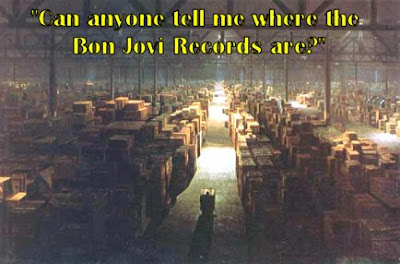 Our warehouse looked just like this, only we had catwalks and lots of little wheelie ramps running all over the place.

Now admit it... I could rock some serious ties, back then...
Posted by bluzdude at 2:26 PM