Do You Believe in Miracles? Um, No.

It’s not been a very good couple of weeks for the Catholics, has it?
Seems that every day another layer is peeled off this foul liturgical onion.  I know bad news always gets the big press, but are there any honorable priests left?
All of these testaments to the side effects of forced celibacy are getting moved around by the churches highest officials, like the world’s most elaborate shell game. 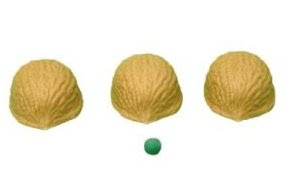 My dad used to be an altar boy so I asked him if anything untoward ever happed to him.
Dad said there was one certain very old priest with whom all the altar boys had a problem.  Seems that when they would help him up out of his genuflect, he was known to pass some gas on them.  When you saw those robes billow, you knew you were in trouble.  Anyway, the altar boys policed this themselves by assigning the altar boy with the least seniority to this honor.
But wait… there’s good news on the horizon…
The wheels are turning to designate Pope John Paul II as a saint.  All they have to do is document one lousy miracle, and say hello to St. JP.
Funny thing, those miracles.  They’re really twisting things around to come up with one, in this modern, skeptical age.  Right now, the front running miracle is that of a young French nun who prayed to the Pope to cure her of Parkinson’s Disease, then she recovered.
Not exactly parting the Red Sea, is it?
Back in the day, the seas part, water turns to wine, the dead rise… I’m sure there was consensus that miracles were afoot.  I mean, there were witnesses all over the place.
So now, a mysterious curing?
Hasn't anyone ever heard of people getting better on their own?  History is rife with stories of cancers receding, blood becoming whole again and tumors shrinking, all on their own.  Were they all miracles too?
This story reeks of the classic logical fallacy: “If A is followed by B, that proves that A caused B.”  Sequence does not equal causality.  I know Fox News uses this ploy all the time with their news “analysis”, but this “logic” were true, you could argue that most anything could be a “miracle.”
Like this:
John Paul was named Pope in 1978.  In the next Olympics, the US Hockey Team upset the vaunted Russian team.  See?  Miracle!  They even call it the Miracle on Ice.  David and Goliath for the 20th century.
Yeah, I know… it’s all about faith.  I’ll tell you what… I have zero faith in anything this corrupt organization has to say.
If you ask me, a real miracle would have been if they actually put the needs of their youngest, most vulnerable parishioners ahead of their need to maintain their grasp on money, status and power.
Posted by bluzdude at 8:00 PM