It’s so hard to eat right at work.
I try… I really try, but I have this one giant weakness.  I even have it on a button.  It’s described in a quote from Oscar Wilde that says, “I can resist anything, but temptation.”
That’s me.
I used to be good about turning down goodies but my willpower has faded in inverse proportion to my age.  In my office, there are always goodies and treats being brought in.  Cookies in the breakroom… Ice cream social fundraiser for March of Dimes…  Bake sales…
On Monday, our department had a massive potluck lunch, for upwards of 50 people.  Geez, there was all kinds of food.  I did OK with that part, eating mostly a couple varieties of chili with rice, and ham slices.
But then there were the desserts.  They had so much delicious stuff.  My favorite, if you can believe it, was the Rice Krispie Treats.  Our cafeteria sells them but they’re just atrocious… always stale.  I know I should quit buying them, but every so often, they just look so good.  Then I bite one and it’s “blech… stale and bland.”
These ones at the potluck were divine.  I had 2.  Now if I would have been able to leave it at that, I’d have been OK.
Buuuuuuut no.
They also had a variety of cheesecake slices.  I had a slice with chocolate drizzle and nuts.  Then some of the ladies in my department started talking about how good the coconut cake was…
“Oh, it’s so light!  And the frosting is the whipped cream kind, not the wedding cake sugary kind.”
“OK,” I said.  If you’re going to get a piece, I’ll take a little sliver.”  I only wanted a forkful.
She brought me back a full-sized slice; the last one.  I think she was trying to kill me.  And I couldn’t not eat it, not after she’d gone to the trouble.
(It was really good, too.)
My contribution to the affair was bringing in shrimp cocktail.  So when the lunch was over, there were about 10 shrimps left.  What the heck am I going to do with 10 little shrimps?  Would they even keep long enough to bring home?
Best not to risk chancing it.  I ate them at my desk.
By this time, I feel like Jabba the Hutt. 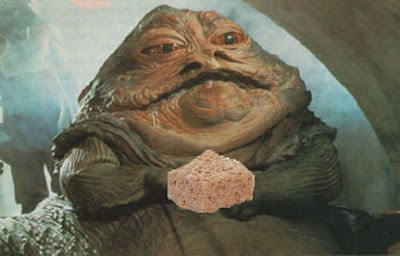 I’m jammed and am wishing I could stumble upon a conference room filled with hammocks.
Maybe I’ll build a little George Costanza Napping Drawer under my desk.
I never even had dinner that night and I was still full the next morning, too.  I’ve been trying to go lighter the rest of this week, but it’s just not working out.
Like today, I went to Burger King for lunch.  I wanted to try one of those new Steakburger XT’s and I had a coupon for buy one, get a small fries and drink free.  I’m thinking, “Small Fry is good.  No sense pigging out on the large fries… I know how bad for me they are and the burger is going to be big.”
So then they gave me my tray, they put 2 orders of fries on there.  I immediately piped up and said I’d only ordered 1 fry.  The manager wavered for a sec, starting to remove one of the orders, but then said, “Ehh, keep’em.”
Great.  Even when I TRY to be good, the universe conspires against me.
Oh, like I’m going to throw them out?  Are you kidding me?  They were straight from the fryer; all hot and crispy.  I had no choice but to eat them.  The idea of not wasting food is imprinted on my DNA.  I just can’t do it.
But it wasn’t all bad news… When I placed my order, I chose the “A1 (Sauce) Steakburger.  But when I opened the wrapper, there was no A1 on the burger.  So the lack of sauce cancels out the extra fries, right?
No?
OK, I guess I better skip dinner again tonight.
Posted by bluzdude at 7:12 PM