This is another installment from the musical memoir I wrote in 1998 (and have been tweaking ever since), called “Brushes with the Great and Near Great,” chronicling some of the famous folk I got to meet during my 13-year career in music retail.  Today’s story covers meeting people at shows, courtesy of home office contacts.
The office parties were certainly convenient, but the high level schmoozing was usually at the concerts.  Vinnie could get anyone who was there into backstage.  Usually, he would secure passes.  If not, he’d get the group’s manager.  If not, he’d get someone from the venue.  That he would get in was always a given, but sometimes he’d have to hustle to get the rest of us in.
He outdid himself on the occasion of a big five-act Alligator blues show at The Egg. 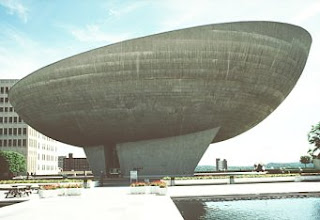 “The Egg” or formally, “The Center for the Performing Arts.”  This venue was too cool not to show a picture.
The show featured Lil’ Ed, Elvin Bishop, Katie Webster, Lonnie Brooks, and Koko Taylor, in a rollicking four hour show.  I had my parents fly out for this one and I knew tickets would be no problem.  Hell, my contacts with Alligator were still good, but Vinnie did even better.  He was a pal with the promoter, who Vinnie got to rope off the first couple of rows for us and whoever else from the office came along. 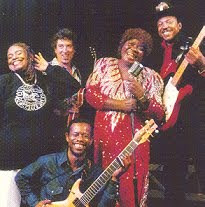 L-R: Katie Webster, Elvin Bishop, Lil' Ed, Koko Taylor, Lonnie Brooks, from the CD graphics of the live album taken from this tour.
The show was great and my folks had a terrific time.  We went backstage afterwards, and met with each act.  Katie was about 4 ½ feet tall and just about that far around.  In the overcoat she was wearing, I thought the “Swamp Boogie Queen” looked like a bag lady.  But man, could she ever bang that piano.  (Check out "The CQ Boogie" sometime.)  Not that Lil’ Ed didn’t deserve his name either.  Lonnie Brooks seemed to kind of scoff at us, as I got his autograph.  As I was with Lonnie, Elvin almost snuck by to make a clean getaway, but I hollered for him and he turned around and signed.  But I really enjoyed meeting Koko Taylor.  Her set was the last, so you could see that she was still tired from the show.  It showed in her demeanor, as well as in the little ball of sweat, still on the end of her nose.  (You can see my tribute to Koko, following her death last June, by clicking here.)
Best of all, my folks were really knocked out by the experience, definitely not used to the star treatment.  It was a joy to be able to deliver and lucky for me, it wasn’t their first concert experience.  If it was, they might have thought that this was how it always worked.
One afternoon, one of our buyers announced, “We’re going to Springfield Mass., to see the Moody Blues, who wants to go?”
Me and about 4 other people that didn’t have a life wanted to go.  Our buyer had Andy, the label salesman, rent a van, and off we went into the December night and a wicked snowstorm.  We got there late, after nearly wiping out a few times, and missed the first couple songs.  But the show was good, the seats were very good and eventually we got warmed up.
After the show, the two main singers and songwriters, Justin Haywood and John Lodge, came out front for the meet and greet.  Unfortunately, I had nothing to sign, due to our hasty and unexpected departure, so I just made nice and exchanged pleasantries.  The storm had somewhat abated for the trip home, but I’m sure this was one night that Andy was glad to see come to an end.
The last show I saw as a single guy was Melissa Etheridge, at the Palace Theatre.  She was touring on her third album, Never Enough.  It was definitely not the night to try to pick up women.  Although this was before she came out as a lesbian, it must have been common knowledge through the gay community, because the place was teeming with lesbians.  I was there with Vinnie, his girlfriend Patty and her two young kids.  I’m sure she had a lot of explaining to do when they got home.
I’d known Patty for some time, mostly from seeing her at listening parties and such.  I got to know her pretty well, because Vinnie, being Vinnie, was usually flitting around and working the room, leaving Patty to fend for herself.  It was shortly after this concert that Patty, through Vinnie, set me up with a friend of hers.  I married her.  (Cold shiver runs down back.)
But anyway, I was pretty nervous about meeting Melissa Etheridge.  I’d been a fan of her previous albums, especially her 2nd, “Brave and Crazy”, which was not exactly a big hit.  But I loved her big voice and the passion with which she used it.  I also thought she was really cute.  For a week, I tried to come up with a succinct way of telling her this, without sounding like a fawning idiot.  I settled on telling her that I admired anyone who could sell a song with such passion.  At least that’s what I told myself I’d say.  When the time came to meet her, I just couldn’t do it, I felt too hokey.  I settled for some vagaries, posed for a picture with her and called it a night.  Damn!  I don’t usually choke like that.  I had a perfect opportunity too, because there weren’t that many people backstage. 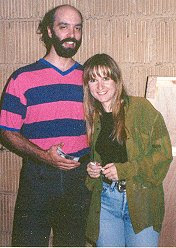 No, really, I wasn't baked.  And you can see that one of the dangers of living alone is that you are at risk of leaving the house in a shirt like that.
When I met her the next time, there was a whole flock of us from the office, so I was lucky to get some CDs signed.  At least I was able to bring my wife, the future ex-Mrs Bluz.  We all posed for a group picture, but I lost custody of that.
Future Ex came on a number of adventures with me.  The first show I ever took her to was George Thorogood, with Little Feat.  That was a hell of a show.  As George took the stage and began carrying on in his customary fashion, she looked over at me and said, “This guy’s wrapped pretty tight, isn’t he?”  It was a rare moment of understatement.
(For a quick hit on how I discovered Thorogood, click here.  Story is near the end of the post.)
I had passes in hand for this show and was very anxious to meet George.  We dashed right back after the show, but were told that George was in his car and leaving within 30 seconds of leaving the stage.  But the rest of the band was still there so we pressed on, wandering around the backstage corridors and looking for some sense of order.  George’s sax player passed us in the hall.  We didn’t stop him though; he was just out of the shower and wearing only a robe with a towel on his head.
Eventually, we encountered the bass player, Billy Blough.  I introduced ourselves and made some small talk, but Future Ex was stupefied. She was completely bowled over by the star power of a sideman. She couldn’t say a word; just the old familiar nod and smile.
But she got over that due in part to the next story…
Posted by bluzdude at 1:34 PM

Wow! Melissa Etheridge and George Thorogood. I am totally impressed and completely envious. You have really had some great adventures, bluz. All I have to do is sit here and read you and get the vicarious pleasure of what you have experienced. Wow!

It almost seems like it all happened to someone else. Good thing I still have the pictures. I've just been very fortunate to have had an interesting young adulthood.

George Thorogood was a staple where I grew up. He used to just walk down the main street in Newark and it was a regular occurance - and yes, he wore those snake skinned pants all. the. time. Newark knew George before he got all famous and whatnot. :-)

Goldey:
I really wished I could have met George… too bad he “big-timed” it out of there. I’ve seen him play 4 times, most recently was 2 years ago at Power Plant Live and last year at Pier 6. A George show is just so primal, so primitive. If cavemen had stereos, they’d play George Thorogood.

You need to go with me up to KClingers in Hanover, Pa next time Lil' Ed plays up there. He's all of about 5' 5" by my estimation. But he's a wildman. First time I saw him he was dressed all in red including a red fez and red Converse All-Stars. And he had a necktie on that was a mirror!

I saw George Thorogood at Heinz Hall of all places in 1982. And on top of that, the opening band was The Nighthawks when Jimmy Thackery played guitar for them. I can't remember who it was, but either Thackery or Thorogood played some slide guitar that night using a coal shovel as a slide!

Just saw Lonnie Brooks last summer, and Elvin 'Pigboy Crabshaw' Bishop a few years back. Both at the Chesapeake Blues Fest in Annapolis. Koko I mentioned seeing earlier in the Buddy Guy sequence.

Man, you are posting these stories faster than I can get to them! Great stuff though. I really enjoy this series.

Lil Ed was a real pisser, playing that guitar that looked bigger than he was. I remember Thackery... heard one of his albums a long time ago. I wouldn't put it past either one of them to play slide with a shovel.

Sorry about the pace... I'm looking to get these stories wrapped up for the weekend. But they'll be here, so take your time. I'm glad you're enjoying them.

Meeting Katie Webster, Koko Taylor, lil Ed, Alvin Bishop is the highlight of my life in music. As Robert Cray said, "If I'm famous, how come Katie Webster isn't." Bless them all.
Queen Ida is an idol too. She did a cooking gig in Green Bay, sat down with the students for a feast. Wish I'd been there.
Will see George Thorogood here in October. Ever good Thorogood.
Wonder full blog. Rock on.