This is another installment from the musical memoir I wrote in 1998 (and have been tweaking ever since), called “Brushes with the Great and Near Great,” chronicling some of the famous folk I got to meet during my 13-year career in music retail.  Today’s story covers meeting a couple of high-profile acts.  For a change.
Far and away the best experience I had at Richfield Coliseum was seeing Lynyrd Skynyrd on their 1987 Tribute Tour.   I called back to Toledo and had my one of my best buds, Rik, come out for the show.  It was, of course, fantastic.  I’d long since given up hope of ever seeing Skynyrd play and this reconstituted effort, with Johnny Van Zandt filling his brother’s shoes on vocals, was an unexpected opportunity.  These were legends, playing their legendary songs.
After the show, the MCA rep asked me if we wanted to join a small party with the band in their hotel room at the Hilton.  I told her that I thought we could fit that into our night’s agenda.  I don’t know if I said that exactly, but I wanted to be nonchalant, as if to show to my friend that this sort of thing happened to me all the time.  But inside, I knew this was big.  This wasn’t some rising star or some blues relic; this was Lynyrd Fucking Skynyrd!  This was “Freebird”, “Gimme Three Steps”, “Sweet Home Alabama” and going down in a plane crash.  These people were legends and I was taking my friend to meet them.
It didn’t take many people to make the room crowded.  Most of the band was there, so Rik and I found some beers and mingled.  Mostly I remember holing up with Billy Powell, their incredible piano player, as he told the story of the plane crash as no one else ever could, from the inside.  He said it felt like rolling down a hill in a garbage can, being beaten by baseball bats.  He told us of drummer Artimus Pyle’s heroism as he made his way several miles through the swamp, with broken ribs, to find help at the closest house.
Seems that they all found God, that day, one way or the other.
That fact came to light when Billy asked if Rik and I were brothers.
“No, just friends,” I answered.
“Well then, brothers of God?”
Rik, nonplussed, surprised me by answering, “Aren’t we all?” 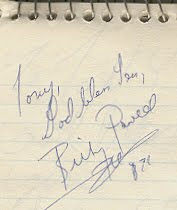 Later, I told him how I was really into his piano solo on “Call Me The Breeze,” and how my brother used it as a softball psyche-up song.  Billy got talking about playing it that night and how his fingers kept slipping all over the place, because of the calluses on his thumbs, which he then proceeded to show me.
The only thing I had with me that night that I could get signed was the little notepad I used to chart their set list.  (Yes, I’m really that much of a geek.  I almost always brought a little pad to concerts to chart their songs.)  After getting Billy to sign, he would flag down every passing band member to sign for me as well.  I got just about the whole band this way, including their backup singers.
Speaking of, there was one that I was really looking for.  Dale Krantz-Rossington was the lead singer in the Rossington-Collins Band, in which Gary Rossington, one of Skynyrd’s guitarists, also played guitar.  The band opened the show and then Dale sang backup, and Gary played guitar for Skynyrd.  My interest in Dale came from knowing that she sang a duet with Meat Loaf, on his third album, and wanting to ask her about it.  (The song was called “Don’t You Look at Me That Way”, from the album “Midnight at the Lost and Found”.  No one but Meat Loaf fanatics has that album.)  I had already clued Rik in to it, so he was watching out for her too. 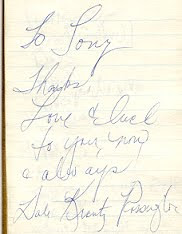 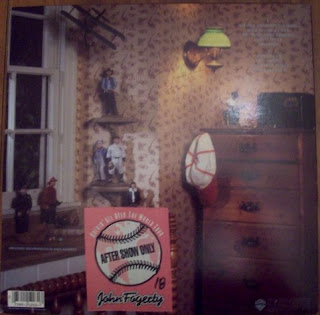 Still without a Sharpie... This is the back cover of the Centerfield album, along with the backstage pass.
He was a small guy, and very soft-spoken, but you could feel the ‘legend’ radiating off of him.  But you could tell that this wasn’t the kind of thing he liked to do, unlike Bonnie, who seemed to revel in the schmoozing.  It was funny, though, anyone looking on might think the guy was a baseball star, for all the balls, bats and gloves he was signing.
Posted by bluzdude at 6:57 PM

I saw Lynyrd Skynyrd in Birmingham, AL, when I was in high school. We sat on the lawn at Oak Mountain Amphitheater. It really was one of the best nights of my life...

...until a fight broke out near my group, and the cops broke it up using mace. Which, it being OUTSIDE and all, then blew directly into the faces of me and my friends.

I rallied in time for "Free Bird," though, so all's well that ends well.

I much prefer it when the cops break up fights with their night stick. Much less collateral damage.

The thing with seeing the Skynyrd show was that this was their first "reunion" tour. I never thought they'd tour again, but when I heard they were using Johnny Van Zandt, I thought it was a perfect solution.

That is insane! And you played it so cool. Lynyrd f'n Skynyrd!

I haven't thought about Blossom in forever, but I loved that place. We never had to buy tickets in advance. We just showed up.

I tried doing that at the Newport Jazz Festival, and after 3 hours in a traffic jam with my buddy and his girlfriend(so lame) we were told the concert was sold out and then shown the exit. Are you kidding me!

Makes me want to move back to Ohio!

I always either got the tix in advance because I didn't like to sit on the lawn. If I'm at a show, I want to actually see the act. On the lawn, you might as well be listening to the radio. (and remember, this was before they started using big projection screens for every concert.)

The only times I went for being on the lawn were things like the Cajun Festival they used to have in Saratoga NY.

Blossom sure was a bitch to get to, wasn't it? I don't remember exactly, but I do remember a lot of narrow winding roads and a real cluster-fuck trying to get out after the show.

Bluz- Was Ed King on that Skyyrd reunion tour in 1987? I'm thinking he was invited.

I saw Lynyrd Skynyrd for the first time just 2 days before Ed King left the band in 1975. 2nd row, Syria Mosque in Pittsburgh. Show was opened by Golden Earring.

This was essentially the original Lynyrd Skynyrd except that Artimus Pyle was now the drummer. With Ronnie Van Zandt (barefoot on stage), Rossington, Collins, King on guitar, Wilkeson on bass, and Billy Powell on keyboards.

My seats were right in front of Billy Powell and the on side of the stage where Allen Collins took up residency. During Free Bird, Collins broke two strings but just kept wailing away on what was left.

Saw them again in 1976 before Steve Gaines joined the band at what was then called the Civic Arena. I call it "The Place Where The Penguins Play" now. Steve Marriott (from Humble Pie), and the Outlaws opened that night. My buddy had some sort of overdose reaction to some drug he had taken so I spent half of that concert straightening him out.

After the plane crash I've never felt the band was the same or as good. With Ronnie gone and some of the others deep into their own addictions it just didn't get it for me. I like Ricky Medlocke and all but it's just not the same for me.

Also saw Bonnie Raitt at the Syria Mosque in 1979 and then again at the Meyerhoff Symphony Hall in Baltimore circa 1987 where NRBQ opened for her. I never thought she was a bitch but I never met her either.

Dog:
Yes, Ed King was with the band on the 87 tour. Boy, I wish I could have seen the original lineup... or at least one of the pre-crash versions.

I always thought Rick Medlocke was living a rock and roller's dream... He gets to play the solos on "Highway Song" (one of my all-time favorites) and "Freebird" to thousands of people. Who else gets to say that?

Bonnie Raitt was so completely cool... I really wish I had brought something besides Fogarty stuff to have signed... or at least a camera. I think there must have been a "no cameras" directive, because I almost always brought my camera.

I don't know whether to rejoice or hang my head in shame about that fact that I had that Meatloaf album. Best concert I ever went to was a Meatloaf concert.

Goldey:
There is no shame in owning obscure Meat Loaf albums. In my opinion, the Loaf was one of the greatest rock and roll singers of all time. The dude could really bring it. And the shows were always stellar. To add a touch of foreshadow, I’ve got a Meat Loaf story planned for later this week.