This is another installment from the musical memoir I wrote in 1998 (and have been tweaking ever since), called “Brushes with the Great and Near Great,” chronicling some of the famous folk I got to meet during my 13-year career in music retail.  Today’s story covers in-store appearances, listening parties and backstage at Richfield Coliseum.  (Or whatever they call it now.)
The only full blown in-store appearance to happen while I was in Cleveland was Megadeth at the Parma Peaches.  Lots of people showed up, but the band was unremarkable.  Not being a fan, I had nothing much to venture with them, but not so little that I didn’t get a signed album.  And I did volunteer for crowd control.  Got to be where the action is, you know. 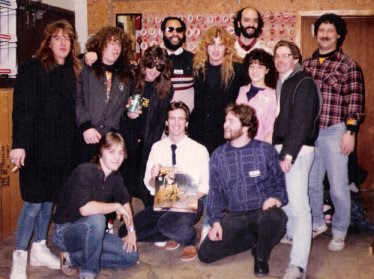 Guess which ones are in the band!
There was also a smaller in-store with a new metal band called the BulletBoys. They had a minor hit with their debut album, but they quickly faded into obscurity. 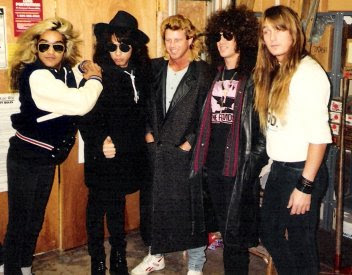 David Lee Roth called... he wants his 1980's look back.
The in-store that really mattered was the one that wasn’t publicized at all.  Sam Kinison had released his debut album and was gaining much notoriety from his HBO specials.  He was coming to town for a show at the Hanna and the label folks wanted to bring him by the store to schmooze.  I caught wind of it and left my store in a heartbeat.  If Bad Sam was coming around, I was going to be there. 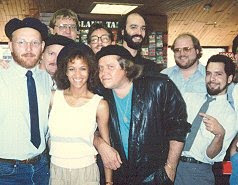 Sam Kinison with the crew from Warner Brothers and some of us store-monkeys.  I'm behind Sam, beside my buddy Kenny the Viking.
When he rolled in with his posse of label guardians, there was hardly anyone in the store.  (Bad for publicity, good for me.)  I had plenty of time to have him sign my album, a flat for my dad and generally just hang around and soak up the ambiance.  Sam must not have been on cocaine that day.  He was pleasant, happy, jovial, funny and inquisitive.  He happily signed for everyone and posed for pictures. 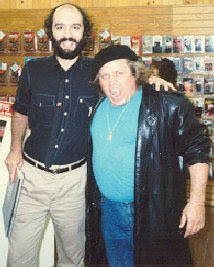 A bunch of us went to the show that night, where he unveiled material that would form the basis of his 2nd album and first full length HBO special.  I can’t ever recall laughing as hard as I did that night.  I was kicking the back of the seat in front of me, with tears running down my face.  I think I even fell out of my chair once.
When Sam died in 1992, I didn’t think of Sam-the-screaming-lunatic-on-stage-that-I-used-as-therapy-when-I-was-feeling-used-and-abused, it was the quiet, gracious guy I hung out with amid the CD racks. For all the press Sam got about his tortures or addictions, I felt honored to have been there to see for his human side for myself.  For all his excesses, you could see that his heart was as big as he was.
Listening parties were another great way to meet and greet.  Usually these involved new bands or artists, promoting their first albums.  Other times it would be for someone who had been out of sight for a while and need a little extra push. The band would play at a club or bar, to a crowd of retailers and record industry people, and there would be free food and drinks for all.
I saw a very promising group at a listening party at Peabody’s, called Texas.  They were a Scottish group with a female lead singer.  I thought their first album was terrific and they played well live, too.  They also were very nice and everyone in the band signed an album for me.  Sharleen Spiteri, their singer, posed for pictures. 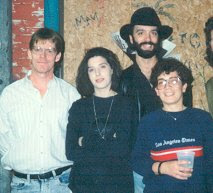 Mike, my district manager, Sharleen Spiteri, and Cindy, another store manager.
I also went to listening parties for metals bands called D.A.D., (Disney After Dark) and Crazyhead.  But one of my favorites was seeing Shawn Colvin at a club called Shooters. She was playing in a little corner of the restaurant section of the place and I remember that her mic or amp or something wouldn’t work.  She was just a little bit of a thing, but I could see the street singer in her come out when she said “the heck with it”, and hopped down onto the floor with us to play and sing unplugged.  During her set, she mentioned that she was from Carbondale Illinois, (where my aunt and uncle lived) so as a frequent visitor there during my childhood, I had something to talk to her about. 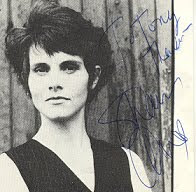 She won two Grammys in 1998 and has always been a critical, if not popular favorite, but to me, she’s the tiny woman amidst all us retailers, nakedly playing her big acoustic guitar.
I saw quite a few shows at Richfield Coliseum, but those shows were always the hardest for which to get passes.  I made a special effort to get passes for a Cinderella/Winger/Bulletboys show, because my girlfriend was a huge Cinderella fan. 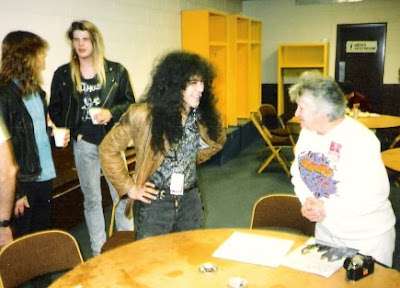 Some guys from Cinderella with the world's oldest groupie.
We met with Cinderella while the Bulletboys were playing. They sat with us around a big table, where we had the opportunity to talk to them.  I thought this arrangement was ideal for her.  Unfortunately, she was struck dumb by their overwhelming star power.  I had to do all the talking for her, which was really just asking them to sign her stuff and telling them that she was a huge fan.  All she could do was grin and nod.  I thought it was a wasted opportunity.  Of course, it was easy for me to be blasé, I didn’t really think they were all that great.
I had an unbelievable opportunity to go backstage with Boston, while they were touring on Third Stage.  Boston was a major touchstone of my high school years and I was thrilled they were making music again.  I was there with my friend Kelly, my former assistant that we spun off into her own store.  The show had finished and the MCA rep found me and asked if I wanted to go backstage.
Of course I wanted to go backstage, but she only had one pass left.  Kelly said she’d wait for me.  What else could I do?
I turned it down, apparently not yet having learned my lesson from the Blackfoot experience.   I couldn’t just leave my friend out there waiting for me while I went off on a backstage schmooze.  But I did give a full-page concert announcement from the newspaper to my friend Marjorie, (a fellow store manager that had come up through the Toledo system just ahead of me) who went backstage and had it signed for me. 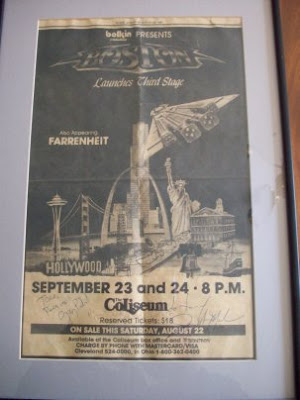 My signed prize, now framed.  And they still hadn't invented Sharpies yet...
I had brought it with me, just in case, as I learned to do from the experience that follows.  In the next post.  Stay tuned!
Posted by bluzdude at 6:56 PM