I did a lot of fun stuff during my college years and one of the highlights was spending 3 years on college radio.

It was never my intention to go into this area at all.  As a junior in high school, I thought I would go into the sciences.  I was digging on my chemistry class and thought it would be fun.  The rest of the sciences… not so much.  In fact, I had this Murphy’s Law calendar that summed up the sciences perfectly:

But when I got onto the school newspaper as a senior, I knew I had to pursue something that involved writing.  I also knew that my chosen school, Bowling Green State University (Yo, class of ’83 represent!  And yes, Cassie, I know you weren’t born yet… don’t rub it in), had a good journalism school, so that was the major I declared.

By the second quarter, I learned that J-School was not for me.  Journalism is a very structured discipline and what I had been doing for the school paper hardly qualified as journalism.  With real journalism, stories had to be laid out in a particular format, with very little room for creativity or flair.  I would have liked it so much better if they would have let me at least make up some of the facts.

So halfway through my first year, I knew I needed to change.  Lucky for me, BGSU also had a good broadcasting school, so I changed my major to Radio-TV-Film, specializing in Radio.  (Later, they changed the name to “Telecommunications.”)

One of the first things I did, my 2nd year, was to join the college radio station.  They actually had two… WFAL was run like a real radio station, with advertising, a playlist and the whole shebang.  Unfortunately, it was only broadcast to the dorms, via telephone land line.

The other station, WBGU was an FM public radio station, with a 15-watt signal that broadcast for an approximate 30-mile radius.  It was much more free-flowing and was commercial free.  That was right up my alley, so into the WBGU training program I went.

The first thing I learned was that the equipment was seriously old, like 1950s vintage.   Our “board” (used to run the audio from turntables, tapes and microphones) looked like this: 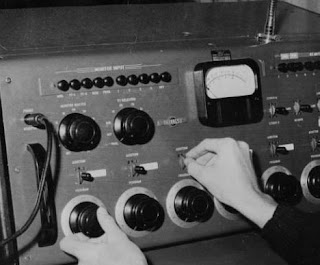 The transmitter looked like it came from Dr. Frankenstein's laboratory: 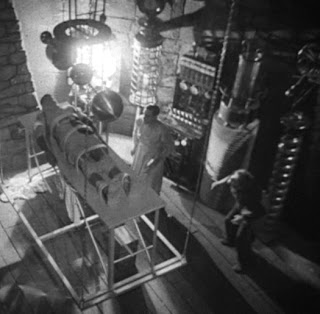 I was sure that if I looked behind the giant cabinet, I’d find those big glass tubes with lightning crackling inside.  Seriously, even my memories of that studio are in black and white.

For comparison’s sake, this is a modern radio board: 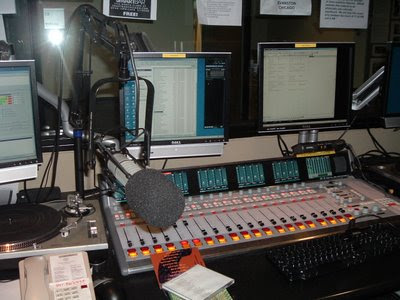 I suspect that this is what other boards for commercial stations looked like even then, minus the computer monitors.

But the old stuff worked, so I learned how to cue up records, change feeds from one turntable to the next, and to use reel-to-reel tapes and the “cart” tapes that we used for pre-recorded promos and PSAs.  We also had to take hourly readings from the transmitter to ensure we were transmitting within approved FCC guidelines.

The shows themselves could be pretty much whatever we wanted to make of them, as long as it was “alternative.”  That was our thing… “WBGU, your alternative radio station.”  I always had a running battle with this.  I could see not being a Top 40 or even traditional rock radio station.  (I would use the term “Classic Rock” station, but at the time, it wasn’t “Classic” yet.)  So I would try to play lesser-known songs and deeper album cuts from bands that people actually knew.

Sometimes that wasn’t good enough… they’d demand we play this endless supply of these obscure albums.  I’d use them very sparingly… It’s like, who wants to listen to the radio and hear a bunch of shit you’ve never heard of?  Sometimes, these things aren’t obscure because of some kind of marketing conspiracy; sometimes they just suck.

I decided to use “The Godfather” as my air name, which as you may remember from prior posts, was my neighborhood nickname in the first place.  I was so excited about my first air shift; I could barely sleep that night before.  But I dreamed about stumbling over my words, dead air and records running out before I could get the next one ready.   I should have taken it as an omen because that was exactly how my shift went.  I was horrible.

I suppose that was to be expected.  But I really wish I hadn’t told all my friends to be sure to listen.  I got horribly tongue-tied, talked in circles, let a song run out and froze up on what to do next, allowing waaaaay too much dead air, and left the mic on while I took a call.  It really was a nightmare.

Luckily, I got better.  I knocked out one 4-hour shift a week for the next 3 years.  At the time, I was really all about the music.  I listen to some of my air checks now and I cringe.  I know times have changed to more talk-oriented radio, but I just sounded so forced, all that jabbering about the songs and artists, over and over again.

I did have one pretty good bit, courtesy of my mom.  We barely lived within the station’s 30-mile radius so Mom would listen in to my show.  I can’t say she enjoyed the music very much and often times, neither did I.  But I had to play for a college audience and not my mom.  Every shift, though, I’d usually play at least one song with her in mind.  So one day, she asked me to play a particular Bob Dylan song, with which I thought I could have some fun.

So I got on there and said (to the best of my recollection) the following:
“I got a request from my mom today, and I’m really not too happy about playing it.  I said, ‘Mom, I just can’t go around playing “your” music, I have to think about my entire audience.’  But you know how Moms are… you just can’t say no to the person that brought you into the world.  So to Bowling Green at large, I know it may not be your kind of music but you all have mothers too so you’ll understand what I have to do.  So to my dear old Mom, I say, here’s your special song…”

I then dropped the needle on “Rainy Day Women No. 12 & 35”, aka “everybody must get stoned.”  I was pretty sure no one knew where I was going with that… they were probably expecting Guy Lombardo or something… What I didn’t tell them was that really was the song Mom requested.

By my 2nd year there, I really started getting into the production end of things, meaning writing and recording spots or commercial spoofs.  I got together with one guy, Darin, and we started a radio soap opera spoof that we called “Search for Reality”.  It was supposed to be about four college students but wasn’t really much more than an excuse to play with the sound effects tapes.  Now, THAT… I wish I could have done for a living.  There was something about sitting in the studio with a fresh roll of reel-to-reel tape, just waiting to be filled up.  I loved doing the cutting and editing process!  Again, this is another antiquated skill of mine… I’m sure it’s all digital now.

Anyway, we had a ball!  We got two other girls in on it with us, but it always seemed like we could never get them both in the studio at the same time, so it was always one girl doing both girl’s parts.  I figured it was like the way Igor’s hump changes sides in Young Frankenstein.

We had a running joke about one of the principals getting mugged by a guy with a chainsaw, so using the chainsaw sound effect became a sort of trademark.

Sadly, Search for Reality only ran for five episodes before Darin was named Program Director, which dried up all his free time.

In the meantime, I became involved with the Jock Training Program.  Go figure… Me, once a total in-studio cluster fuck, teaching DJ basics to a group of freshmen.  OK, so maybe I didn’t do so much teaching as I was comic relief for my fellow instructors.

But while doing the training bit, I “discovered” these two freshmen who were as twisted as I was.  Their test answers as funny as anything I’d ever written, so I quickly put the hook on them and had them come up and sit in with me on my show.

Now I was finding my place.  As crummy as I always felt I did when it was just me and a mic, I was so much more at ease when I could bounce off of someone else in the studio.  My two freshman friends became “Sandtrap” and “TJ”.  We spent my senior year guesting on each other’s shows and generally having a blast.

My last show was during Exam Week, May of 1983.  That was the one show that I completely broke format.  I played my favorite music, didn’t take requests or even phone calls; I just let it fly.  Sandtrap and I did quite a bit of pre-production for this show, especially for the end.  In fact, we almost destroyed one of our production studios.

Not being one to go quietly into the good night, I wanted my last moments to be memorable.  Because exams were liable to conflict with our regular air-shifts, jocks had to sign up for individual shifts during Exam Week.  I took the shift from 5 to 9 pm and Sandtrap booked the slot following me.  So we worked out my “exit strategy” which I’m sure left an indelible mark on the 12 or so people that were listening that night.

Now because I like you, I have resurrected those last moments from the vast Bluzdude Archives, so that 27 years later, I can bring to you, in glorious monophonic sound, “The End of the Godfather.”
Note:  That is a pic of yours truly in action behind the mic, as captured by a Friend of Bluz (and girl character from Search for Reality) and published in her local newspaper.  (Hence, the yellowing... I actually had much better skin tone.)
Posted by bluzdude at 3:06 PM