My last post put me back in The Barn and I found I like it there.  I figured this was as good a time as any to continue with the story of The Barn.
Note: there are several prior posts that explain about The Barn and some of the wild-ass parties we threw out there, back when I was in school.
As I wrote before, my friends and I more or less built The Barn from scratch, with trash-picked couches, old rugs, beer lights, Christmas lights, and other odds and ends.
Around the time I was a senior in college, my dad decided he wanted to turn The Barn into more of an “unattached family room,” and thus began the Great Barn Renovation.  We already had a big-screen TV out there left over from the 1980 Super Bowl party.  Dad decided he wanted to put up some kind of ceiling, replace the gas stove with a wood-burning fireplace, and install wall-to-wall carpeting.  He also wanted to erect 2 dividing walls, one to wall off the front area that had the oven, and one about halfway back through the party room.  That wall was to have doors that we could open up for parties, but keep closed if we were just in the main area watching TV.  (I’ll get to the TV later)
Oddly enough, none of us knew how to go about doing this.  Luckily, we had Grandpa.  My dad’s Dad came out and put us all to work.  He didn’t really have to do much himself; he just told us what to do.
“Put that there… hold this here…  nail this in… cut right there…” 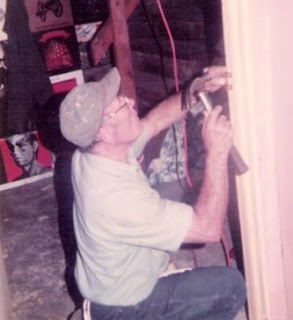 Grandpa, getting his hands dirty.
We were Grandpa’s cutting, nailing, sanding and painting Army.  Most of my job was to hold the ceiling planks in place while someone else nailed them up, because I was the only one tall enough to reach the ceiling without a ladder.
That’s when I learned the benefits of molding.  Whenever 2 boards or planks don’t line up flush, it doesn’t matter if you just put a strip of molding over it.  All sins of mismeasurement are forgiven.
We also encased all the steel I-Beams in strips of wood.  Then we stained all the new walls, the ceiling and beams, and painted the cinderblock walls.  The only thing we didn’t do was put down the carpeting… that, we left to the professionals.
Let me show you some of what we did, in pictures.  Unfortunately, we didn’t take any as we were going, but I can show you what’s visible in the background of other party pictures. 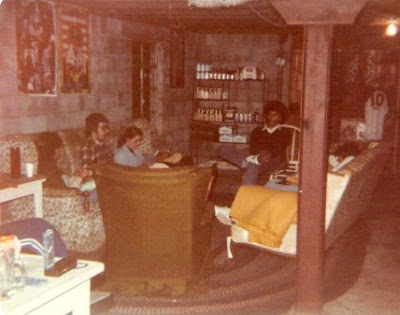 This was the back end of The Barn, in it’s original state, when we first set up out there. Note the ugly cinderblock walls and concrete floors.  And no, those beers on the back wall were not our supply, those were just empties, that for some reason we used to keep. 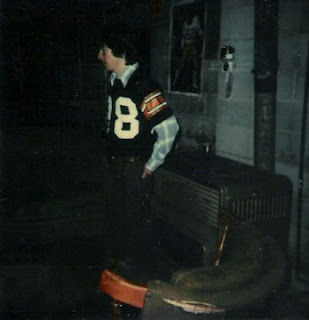 This was my buddy Brill standing in front of the old gas heater.  We used to sit an oscillating fan on top of it, to spread the warmth.
Now, the transformation… 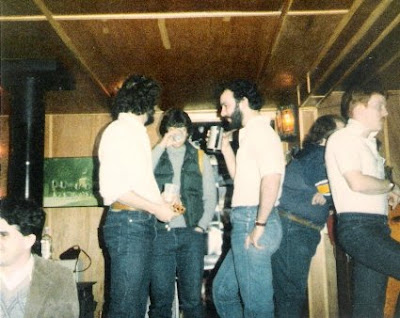 On the far left is the pipe and front end of the wood-burning stove.  Straight back and above, you can see the forward wall and new ceiling, all nicely stained.  Also note the wood-encased I-Beams to the right.  As for all the dudes, I’m in the middle there, talking with my 2 protégés I worked with at the college radio station. My buddy Rik is there at the far right, on leave from the US Navy.  The big guy in purple is Kenny the Viking, who you may remember accompanied me on several adventures detailed in the Brushes With the Great and Near Great series from March. 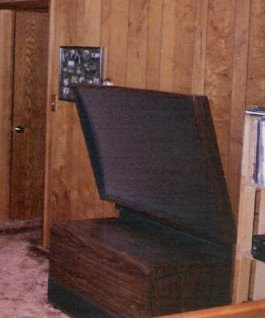 This was Dad’s baby… (pictured later in their house.)  We thought that was the greatest thing ever, especially because we got to keep it in The Barn.  Dad used that TV for the next 25 years, until he could no longer get parts for it.  The picture was surprisingly good, considering the technology of that era.  The front part would flip down like a giant “L” and project the picture up onto the screen. 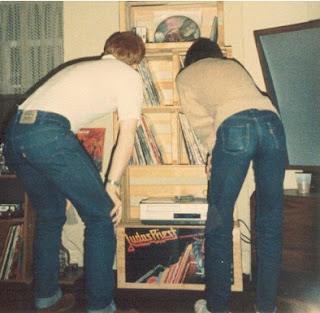 My buddies, scoping out what was then my meager album collection.  You can see the TV on the right and the stereo setup on the left.  But also notice the nice painted walls, and windows with actual curtains.  (Mom’s idea… I would have been happy with aluminum foil.)  Also note the early-80’s edition VCR.  The remote actually had a cord!  I used to sit out there watching MTV for hours and hours, recording all the videos I liked. 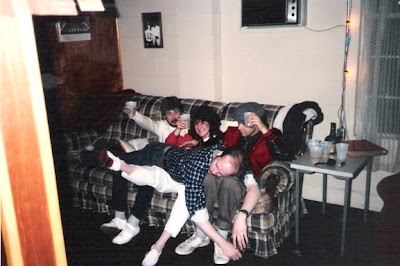 Lastly, Mom and Dad got new living room furniture, so we moved the old stuff out to The Barn.  (And once we sold the house, it became my living room furniture.)  While you can’t really see much of the carpet, you can tell, at least, that it’s not bare concrete.  To the left is the back dividing wall that had the big double doors.  Dad and Grandpa also put in an air conditioner the next year.
There were other improvements too.  Dad bought a Keg-O-Rator beer-tap refrigerator.  Just what a college boy needs, beer on tap.  That was sweet!  Another big improvement was getting cable out there.  Heck, getting cable anywhere!  It took forever for cable to be brought out to the sticks where we lived, but once Dad got the cable guy out there, he slipped him a few bills to run the cable out to The Barn, off the books.  That’s what made my MTV habit possible.  We also installed a station-to-station intercom, so that we could call from the house to The Barn.
"Breaker breaker, this is Number One Son calling for Lil Mother.  We need some cinnamon buns out here right away, over."
You know, if that place had a bathroom, I could have just lived out there.  Hell, it was already bigger that my first 2 apartments.
It was a great place to take girlfriends, I tell you!  Sure there were a lot of windows, but you could easily block the ones on the neighbor’s side, and there was a couch-back blocking to side facing our yard… It was perfect!  Low lights… a little MTV… a couple beers…
It was a cryin’ shame to have to leave.  But my dad got a job in another town (Baltimore) and that was that.  We had one last big Barn Party Blowout and just tore it up.  Everybody came back for that one, even Billy, all the way from Georgia.  Actually, that’s the occasion upon which the previous picture was taken.  That’s my buddy John, passing out across Brill, our neighbor Margaret, and Billy.
Then everything was packed up and moved out.  Everything my folks wanted to take, anyway.  The night before we closed on the house, me, Brill, Rik and John went out for one last gathering.
In an odd way, it was like closing the circle.  The Barn was going out the same way it came in, with the 4 of us, a case of beer and a couple of old scrap tables.  All the cool toys were gone, but we still had an old AM/FM radio.
It was well into autumn and decidedly chilly, so we decided to light the wood stove one last time.  Soon enough, it was plenty warm.  Brill went out to take a leak and almost immediately came tearing back in.
“Jesus!  The fucking Barn is on fire!”
We dashed outside and looked up to where Brill was pointing.  You could see flames shooting out the top of the wood stove chimney on the roof.  It looked like a bird’s nest or wasp nest caught on fire.  Luckily, the chimney and the Barn roof were made of metal.  One of us went in and cut off the air to the stove, which choked out the fire.
“Phew.”
Someone said, “Geez, Bluz’s dad would have killed us!  We almost burned down The Barn.”
Then Brill piped up, “Fuck it!  If we can’t have it, no one can!”
With that, we laughed our way back into The Barn, for one last toast.
Posted by bluzdude at 8:45 PM