Time After (Over) Time

Last night’s Penguins game going into triple overtime brought back memories of the time that a hockey game irreparably damaged my marriage.
Once upon a time, back in the 90s, I was married (cold chill runs down back.)  Future-Ex had 2 kids: one was in his early 20’s and out of the house, and the other was 11 (at the time of this story.)  I talked a little bit about the younger one in my post about Christmas/Santa Claus issues.
When we met, Future-Ex knew nothing about hockey, or any other sports for that matter.  I’d try to explain hockey during games on TV, but it never sunk in.  Plus, she didn’t much care.
But one day, I got a pair of free tickets to go see the Albany River Rats, the new minor league hockey team in our area.  Once I got her to see a game in person, she got much more interested, so much so that by the next season, we bought a small ticket package.  I might have had to remind her of the difference between icing and offside every time, but she re-grasped it quickly and knew enough that she would stand up and scream “Hit’em, just hit’em!  Beat him up!” when it was appropriate.  She knew to yell, “Get it out of there!” when the team needed to clear the defensive zone.  As a native New Yorker, she was very good at yelling things.
When Albany won the Calder Cup in 1995, we went to the big downtown Cup celebration and took videos and got autographs.  That fall, we went to Meet the Rats night, where after the game, you could go down on the ice and take pictures with all the players. 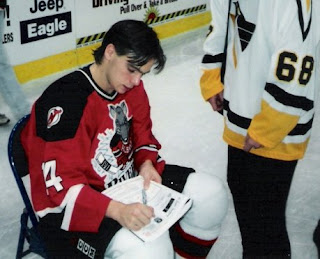 Steve Sullivan, currently with the Nashville Predators, signing for the Future-Ex, who is wearing my Jagr jersey.
All in all, we had big fun with it.  Once she took to live hockey, I got her to watch some Penguins games with me on TV.
Now, back in those days, my parents still lived in Green Bay WI, and would take trips to Panama City FL on vacation.  They’d stay in house right smack on the beach.  Pretty soon, they figured out that it would make a great family vacation spot.
They proposed having us get together in Panama City during the spring of 1996.  When I first talked to Future-Ex about it, she shot it down pretty quickly.  She didn’t want to take the boy out of school.  Plus, it would be a pile of cash for all of us to go.  So I told my dad that we were out.
Maybe about a week later, she reconsidered, thinking it would be a good family outing and represented a lot of bang for our bucks.  (The more people dividing up the cost of the beach house, the cheaper for all.  It really was a great deal.)  I called Dad back to see if we could get back in.  He said that he’d already booked a smaller place for just him and Mom, and my brother and his wife.  But if we could live with sleeping on a foldout couch in the living room, they’d still love to have us come.
Future-Ex and I discussed it and decided to go for it.  Mom and Dad had a room, my brother and his wife had one, Future-Ex’s boys would share a small room with 2 twin beds, and we would hit the couch in the living room. 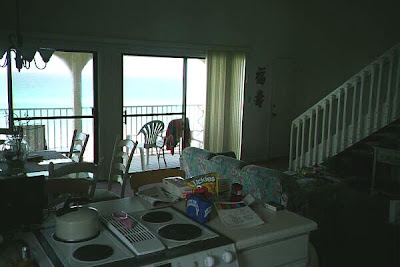 The couch in the middle of the shot was our bed.  It's facing a small TV, just out of frame.
The place was absolutely beautiful, with a grand view of the Gulf.  The sunsets were gorgeous! 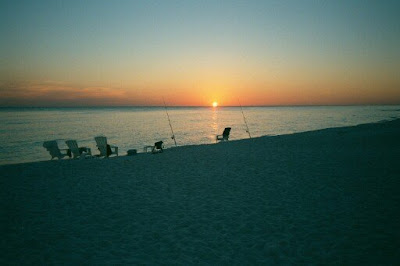 Sunset over The Gulf. 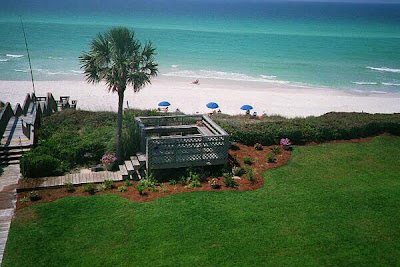 This was the view from our balcony.  Not a bad place to spend a week, eh? 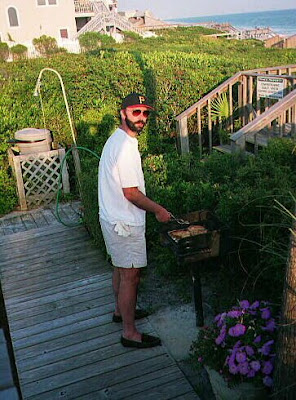 Yours truly, whipping up his famed Chicken ala Bluz.
“What the hell does this have to do with hockey?” I hear you cry?
We took our vacation in April, when the playoffs were going on.  The Penguins were going up against the hated Washington Capitals.  I was really digging it because it gave me a rare chance to watch the Pens with my dad and brother, i.e. 2 people that knew something about hockey, for a change.
If you’re a Pens fan, you probably remember what happened on April 24, 1996 (14 years ago, tomorrow) and know where I’m going with this.
That night, the Pens and Capitals played a game that went into 4 overtimes.  It was excruciating, and that’s just for hockey fans.
All Future-Ex wanted to do was go to bed, but there was nowhere for her to go.  Mom was upstairs in her bed, my sister-in-law was in hers, the boys were in their twin beds and unless she wanted to go sleep on the beach, she had to wait for the game to end before we could open the couch and call it a night.  I know that sleeping on the beach sounds like a romantic idea but all the little crabs on the beach that came out at night would have banded together and carried her away.  (Hmm, come to think of it, I should have made that recommendation.)
What, you think we were going to bail on a playoff game?  Not bloody likely!
I tried to sympathize the best I could, but as the hours rolled by, there wasn’t anything I could do.  It’s not like we were conducting a plot to deprive her of sleep, but the living room was the only place we could watch the game.
When the game finally finished around 1:00 AM (Central Time) as the 5th longest game in NHL history, (Whoo hoo, Pens win!) she was seriously pissed.  I tried to delicately explain that if she hadn’t dilly-dallied around before finally consenting to come, we would have had our own room and this never would have happened.  I may have slightly miscalculated, because for some reason, this only seemed to make her angrier.
We got through the next couple days before we had to leave, but it was frosty.
And from that day on, she never, ever went to another hockey game with me.  And whenever a game would come on TV, she’d leave the room.  Honestly.  She was Done.  With.  Hockey.  Forever.
And me too, soon after.  We were on the outs by January of the next year.  Yes, there were other issues, but I still think that night played a part.
I got even though…  I moved 600 miles away, so she’d have to find someone new to yell at.  Revenge is mine!
Posted by bluzdude at 7:12 PM