Of all the things in my previous post about working in college radio, I can’t believe the thing that caught the most attention was my flippin’ hair.
OK then, let’s talk hair.  I wasn’t always the acorn-head I am today.  I started out with a brush-cut, however, like all little boys did in the early 60s.  Dad would take us to Grandpa’s house, he’d get us in the basement and shear my brother and I like we were his little sheep.
In January, I told the story of the fights I had with my hair when I was growing up.  But for the benefit of new readers, I’ll quickly restate… If you remember the story, feel free to bloop bloop bloop until after the italics.
“I’ve always hated my hair.  All I ever wanted was to have nice, smooth, perfect bangs and hair that lay down just so.  Preferably blond.
No luck though…  I had hair that just would not obey.  One side would always flip in, the other side would flip outward.  As a teenager, I would blow-dry my hair straight down and then put on a ski cap… winter, summer, whatever… all in an attempt to bring some kind of order to my hair.
It worked like a charm though, right up until the time I’d take off the ski cap to go to school and the first molecule of air would blow by my skull and BANG… hair was going every which way.
It wasn’t until I got to college that I finally came to an understanding with my hair.  I was visiting one of my buddies in Georgia on vacation (as mentioned in the “Year of Pranking Dangerously post earlier this month) and was just sick and tired of messing with the mop on my head.  So I dove in the pool, got out, shook off my head and said, “Whatever it does, that’s what it will be.  I give up.”
Turns out, I had curly hair.  Even more so after I took my buddy’s mom’s advice and got a perm.  Made me look like the drummer from the band, Boston.  But once that passed I had a brief spell when everything looked OK.
I say “brief” spell because just as soon as I accepted the hair with which I was graced, it all fell out… It was quickly receding by the time I was a senior in college and I was cue-balled by 25.
Sometimes life is grossly unfair.”
Not only did I have to fight with my hair, I had to fight with my dad about my hair.  In the 70s, the longer your hair, the cooler you were.  So we had the usually father/son differences… I wanted it long and cool; he wanted it short and respectable.  He even sent me back to the barbershop once, when I didn’t have them take enough off.  It figured… it was the first haircut I’d liked in ages.  In all honesty, the barber probably didn’t cut anything off at all… probably just made snipping noises behind my head.  No wonder I liked it.  Didn’t fool the old man though… he sent my ass right back to have it done again.  Ooooh, I was pissed.
The hair wars pretty much abated once I got that perm, and like I said, the first one was just a disaster.  But I figured out my look soon enough and for a year or two in college, I had reasonably good hair.  So, there was no Jeri Curl and no “product” of any kind.
Another thing I did, right out of high school was grow a beard.  We weren’t allowed to have beards at my high school, so I’m sure part of it was a sense of rebellion.  But on the other hand, a lot of the men in my family had beards.  My dad grew beards on and off throughout my whole childhood.  Several of my uncles also had beards.  So it was a look that I was accustomed to right off the bat. 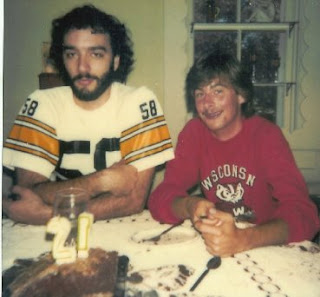 This was me on my 21st birthday, lit up on wine and digesting a huge spaghetti dinner and some German chocolate cake with my buddy Brill (who was about 5 months older than me, if you can believe it.)
I probably went overboard at first.  Teenage boys do pretty much everything as a kind of contest among themselves and I was no exception.  I grew a big, full, bushy beard, just because I could.  (Being Italian helps.  When I was born, the doctor was like, “Nurse, I’ll cut the cord, you shave him.)
As I got older, I finally figured out a good length to keep it, with maybe a half-inch growth, and I always tried to keep the fly-away hairs trimmed.  But it was always a full beard, cheeks and all.  (But no neck-beard.)  Shaving was a breeze in the morning, that’s for sure… 45 seconds and done.
I always thought it was good to have a beard if you were bald… It breaks up the monotony of your face.
Years later, I still had the same beard.  Only now, there were a few too many white hairs mixing in under the chin.  But for much the same reason I kept longish hair in the back, so to not look like every other balding office monkey, I also resisted doing anything with my beard.  By this time, every putz on the planet had a goatee… I would have been just one more.  But those white hairs…  Hmmmm…
I began some long range planning.  I started shaving a little bit lower on my cheeks each week, just to try and get some daylight on them.  Remember, this was skin that hadn’t seen the light of day since 1979.  This was a big concern of mine… that I’d start stripping off the beard and find nothing but sickly, pasty white skin.  But each time I trimmed down a little lower, the skin was fine.
I was still really nervous about changing the beard though… I mean, I always sort of hid behind the hair.  Without the beard, I thought I’d just look like a thumb with a face on it.
To put my mind at ease, I took an old picture of me rocking the full beard, and tried to photoshop it into what I would look like in a goatee. 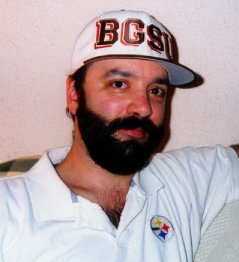 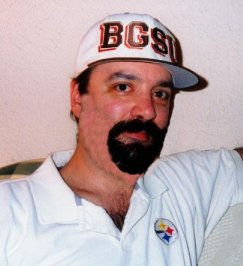 Photoshopped goatee simulation.
It didn’t seem too horrible, except for the grotesque appearance of scarring left by my amateurish photo-shopping skills.
Finally, I was ready.  Figuring I’d trust the professionals, I went to the Hair Cuttery and while I was getting a haircut, I asked if the stylist could trim my beard into a goatee.
She said, “What’s a goatee?”
Unbelievable.  I should have said, “It’s the kind of beard that everyone in the state that’s not an Orthodox Jew is wearing.”  (I live in a neighborhood with a lot of Orthodox Jews, who all rock the ZZ Top beard.)
I didn’t really know what to say… I didn’t want to say the wrong thing and end up with something ridiculous.  She said to tell her were to trim and she’d do it.
I said “never mind.”
So there I stood that night, April of 2004, in front of my mirror, shaver in hand.  I’d pick it up, turn it on… turn it off again and put it down.  Over and over, for 10 minutes, I stood there like an idiot.  Finally I just took a chunk out across my cheek…
“There!  Now I have to finish.”
Somehow, I managed, and was pretty happy with the outcome… until I got to work the next day.  I was so unaccustomed to being barefaced; I hid in my cube all morning.  Finally, one of my co-workers, an older black lady, saw me and made me feel so much better.
She said, “Bluz, you look 10 years younger!”
I eventually ventured out and found that that was the consensus.  It was a turn for the better.  After 25 years of full beardedness, I finally achieved a state of looking like everyone else.  Oh well...
I didn’t even tell my family I did it.  We had a big wedding coming up that month and I figured I’d spring it on them.  It was on my dad’s side of the family where he and I have been the only ones with beards.  My grandma didn’t like them on either of us.  She’d always say, “But I can’t see your face, with all that hair.”
It was probably harder to get a fistful of cheek, as well.  A beard is a good cheek-pinching deterrent system… tougher to get a good grip.  So she and my mom were both happy when I showed up looking like this: 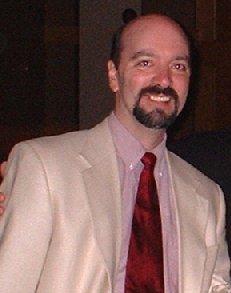 “Excuse me, can you direct me to the hot chicks?”
Next topic:  Body hair!
Posted by bluzdude at 9:07 PM