The movie “The Runaways” finally opened in Baltimore this weekend, so I went to see it yesterday.  (The Runaways were an all-girl rock band in the 70’s that featured future rock stars Joan Jett and Lita Ford.) 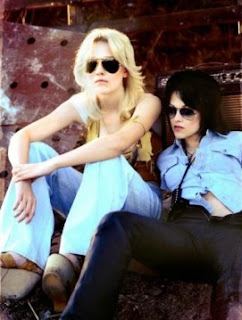 Dakota Fanning as Cherie Currie and Kristen Stewart as Joan Jett
The original opening date had been listed as 3/19, but that turned out to be a “limited release”, and Baltimore was one such market to be off limits.  As you may remember, I’m a die-hard Joan Jett fan.  I was not at all happy about their moving my cheese.
So in the 3 weeks between releases, I decided to prepare by ordering a couple of books from Amazon.  The movie is based on the memoir “Neon Angel” by Runaways singer, Cherie Currie.  I also picked up a Joan Jett book based on interviews, wrapped around a ton of old pictures.  Joan was an executive producer on the movie.
The Joan Jett book was an easy read and the old pictures were really cool.  It definitely cast a rosier outlook on the Runaways period than did “Neon Angel.” 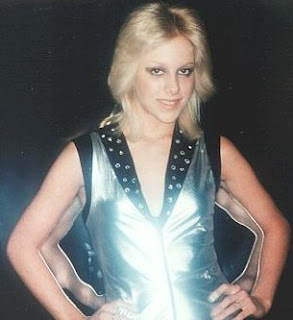 Cherie Currie from her Runaways days.
The Currie book was harrowing to read.  What the rock business and society at large did to those little girls was sickening.  What you forget is they were freakin’ 15 and 16 years old when they were in that band.  The demands placed on them by the business in general and their sick manager in particular were more than any kid should have to live with.
That said, the intestinal fortitude it took for them to go out there and rock out in front of sometimes-hostile audiences was amazing.  They played to slam-dancing, bottle throwing punks in England, opened for major rock acts like Van Halen, Tom Petty and Cheap Trick, and toured Japan to throngs of adoring fans.
Back in 1976 through 78, when The Runaways were playing, I’d never heard of them.   The LA “Glam” scene was as far away from my Ohio life as another planet.   But I knew that look.  All the hottest girls at my junior high school had those shag haircuts and high-waisted jeans.  Say what you want about the 70’s, but I loved that look.
I’d heard a lot of advance movie press about how well the actress Kristen Stewart (of “Twilight” fame) captured Joan Jett.  As one who has studied Joan Jett for almost 30 years, I was eager to see for myself.
I was absolutely blown away.  Kristen Stewart became Joan Jett.  It was like I was looking into a time capsule and seeing the real deal. 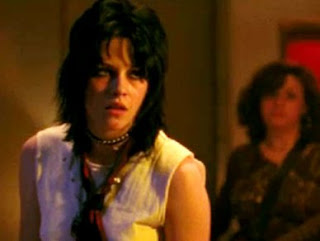 From the hair, to the smile, to the way she hunches over when she plays, to the barely contained kinetic energy of the way she moves, she had Joan down perfectly. 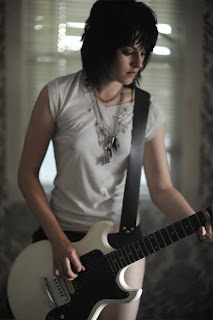 I also have to give high marks to Dakota Fanning. 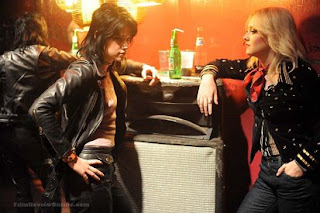 "Joan" meets "Cherie" in the movie.
I admit I have less to go on with Cherie Currie because all I know about her comes from album covers and YouTube videos. 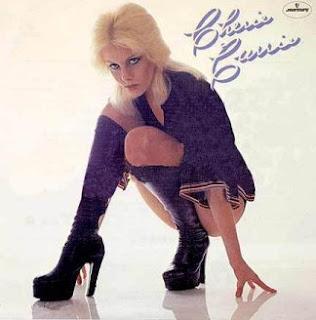 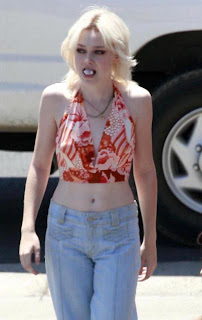 Dakota Fanning as Cherie Currie.
The movie was amazing.  I swear that you forget, at times, that you’re watching people pretending to be other people.
My favorite bits involved the song Cherry Bomb.  I first heard it as a song from one of Joan’s solo albums, although I knew it was a Runaways song.  But Joan’s version is one of my favorites.  It’s got this gritty, “don’t fuck with me” toughness to it.
The song actually starts at the 25 second mark.  The video shows Joan doing what she does best, shmoozing with her fans and rocking out on stage.
What I didn’t know, until I read the book and saw the movie, is that the song was written expressly for Cherie Currie.  When she showed up to her audition and the only song she’d practiced was unacceptable to the rest of the band, Joan and their manager, Kim Fowley, stepped away and wrote it on the spot.  Watching the song come together in their crappy rehearsal trailer gave me goose bumps all up and down my arms.
The song became Currie’s trademark; right down to the cherry tattoo she got on her right shoulder.  When they finally busted it out on stage, it gave me goose bumps all over my body.  It was perfect.  In fact, it looked just like this:
The drug use shown was rampant and at times, hard to watch.  Even so, it didn’t come close to the depravity described in the book.  The girls had things happen to them, Currie in particular, that just broke your heart.  I was actually glad the movie skipped that stuff.  Seeing Currie have her virginity forcibly taken by her sister’s scumbag (older) ex-boyfriend and later being kidnapped, beaten and raped over several days, was not something I cared to see onscreen.  With stuff like that in one’s life, the drug abuse seems inevitable.
It helps to know that everyone eventually came out OK on the other side. 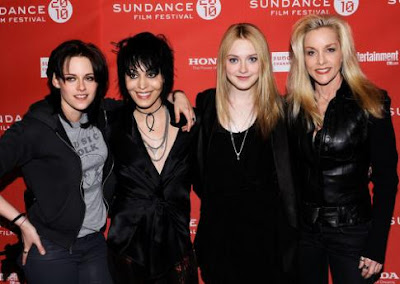 The actresses with their real life doppelgangers.  That’s a lot of hotness, at any age.
Posted by bluzdude at 3:22 PM