My proclivities for game-day apparel superstitions have been pretty clearly spelled out here throughout last year’s football season.  I believe in Game Day Mojo, in that what I (and other fans) wear during the game affects the outcome.  I even keep a spreadsheet to track the effectiveness, year over year, of various jersey and hat combinations, factoring in variables such as home and away games, what I wore on the prior business day and where I was when I watched the game.
Yes, really.
Mojo also counts with hockey.  Due to the long nature of the 82-game hockey regular season, I’m not fanatical about it.  I normally attempt game-jersey mojo for weekend games and then during the playoffs.
Last year was different though.  The Penguins needed a big late-season push just to make the playoffs.  One thing I noticed was that my game jerseys weren’t working.
Normally I’m all about wearing the game jersey, but through the first half of the year, the Pens just sucked completely.  I stopped wearing the jerseys and went to Penguins T shirts roughly the time that the Pens fired their coach and hired Dan Bylsma.  Then the next thing you know, they’re tearing it up.  Right in the middle of their big winning streak, I tried a jersey one more time for a game against the Capitals and we got smoked.  I didn’t wear another jersey for the rest of the year.
The Penguins won the Stanley Cup last year, culminating with a 7-game series against Detroit.  I tell you, I had to seriously work the mojo angle.
For games 1 & 2 in Detroit, I went to my go-to playoff tee shirts and was stunned by their ineffectiveness.  For the game 3 “whiteout” in Pittsburgh, (where everyone in the arena was asked to wear white), I had just bought a white tee shirt from the Mario Lemieux Foundation, that has all these Pens references, nicknames and hockey terminology.

Click the pic for a better look at the detail.
The Pens won, so I wore the same shirt for game 4 and they won again.  Then I wore it for game 5 back in Detroit and they got spanked in a 5-0 whitewash.  I was going to ditch that shirt after that, but figured it was only ineffective because Game 5 was in Detroit, so I wore it again for game 6 in the Burgh.  The Pens won, sending the series back to Detroit for the final game.
So for Game 7, there was no way I was going to wear the white MLF shirt that I wore for the Game 5 beating.  I reached deep into my closet and pulled out a gray Penguins “All Guts, No Glory” tee.  Totally the right move. 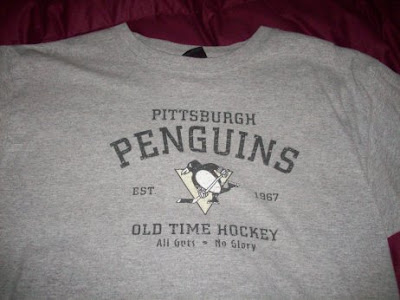 The Pens won the Cup that night, leaving me in a state of near emotional collapse. 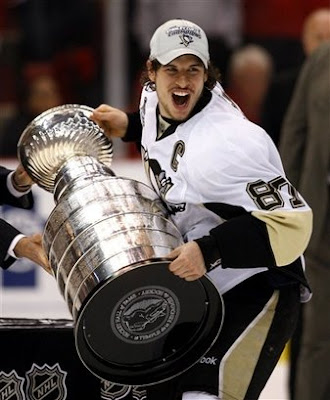 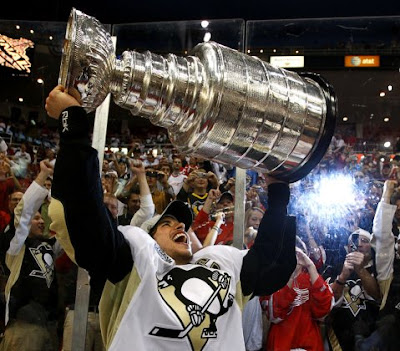 ...Commence emotional breakdown!
Now here we are, beginning a new Cup run.  Game 1 was last night and I tried to get some jersey mojo started last night, opting for the black Sid Crosby game jersey. 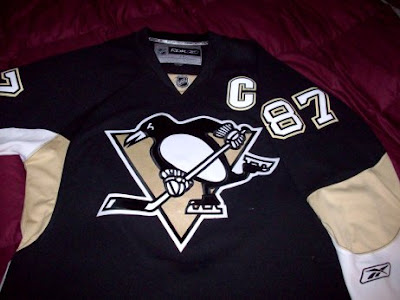 No such luck.  The Pens lost 5-4 in a nail-biter.  I’m not abandoning the jerseys yet… Next game is Friday night and I’ll probably break out the old-school Snoop Dog era Mario Lemieux black jersey. 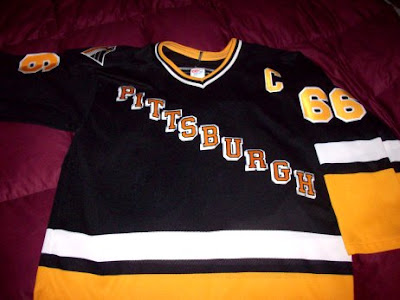 If that doesn’t work and we go down 2 games to zip, I may have to bring back that MLF tee.
It’s an awesome responsibility I have, I know, so I must take great pains to make calm and rational decisions about it.  We expect a lot from our team and so we must be willing to give back just as much.  Or else, you might as well just watch bowling.
This is a video of the last seconds of the game and the celebration thereafter.  I'll never get tired of seeing this.
Note: To the Crazy Brunette, and all others that are bored senseless by sports in general or hockey in particular, let me just refer you to a post from last October, that you should find more entertaining than this one: The Funniest Story Ever Written (By Me).
Posted by bluzdude at 7:11 PM