I love it when I get those emailed memes that go around, not because they’re necessarily deep or clever, but because I can get a cheap post out of it.  I got one this week… I’m sure you’ve seen it before; it’s been around a while.  So I thought I’d run with it and add my own observations.
Adult Truths
1. I think part of a best friend's job should be to immediately clear your computer history if you die.  I can’t believe there’s no Self-Destruct key yet.
2. Nothing sucks more than that moment during an argument when you realize you're wrong.  Not that it’s ever happened to ME, mind you.  OK, really, the tip-off is when the subject changes.  I hate that when I’m having an argument though… when my opponent changes the subject, which basically means, “OK, I may be wrong but I’m still pissed off, so I’m going to bring up something from the past, be it yesterday or 6 months ago, and start in on that.”
3. I totally take back all those times I didn't want to nap when I was younger.  I now understand how naps are under-rated.  Every office building should have a hammock room, if you ask me.  You start the timer, then after an hour, it flips over and dumps you out.  Hey, I’m no barbarian… I’d put cushions underneath.
4. There is great need for a sarcasm font.  I heartily agree.  As if I really care…
5. How the hell are you supposed to fold a fitted sheet?  I’m glad it’s not just me that stores the bottom sheets in a ball on the shelf of the linen closet.
6. Was learning cursive really necessary?  I haven’t used it since 10th grade.  I use a kind of hybrid of printing and hieroglyphics.  In fact, I don’t think I’m even capable of writing anything in cursive any more, aside from my signature.  And even then I still print the capital letters.
7. MapQuest really needs to start their directions on # 5. I'm pretty sure I know how to get out of my neighborhood.  They need to work on a way to make it easier for you to start with “I-695 near Pikesville.
8. I can't remember the last time I wasn't at least kind of tired.  Sucks getting old (er).
9. Bad decisions make good stories.  Been saying that for years… good comedy comes from suffering.  Who laughs at a story were everything goes just right?
10. You never know when it will strike, but there comes a moment at work when you know that you just aren't going to do anything productive for the rest of the day.  And some days, it comes earlier than others.  Like, say, 10:30 AM?
11. Can we all just agree to ignore whatever comes after Blue Ray? I don't want to have to restart my collection...again.  Probably too late for this one… here comes 3D-TV.  You have to buy a whole new TV for that one…
12. I'm always slightly terrified when I exit from Word and it asks me if I want to save any changes to my ten-page technical report that I swear I did not make any changes to.  So even though I KNOW I didn’t change a thing, I’ll still hit {Save} just to be sure.  We have become a paranoid culture. 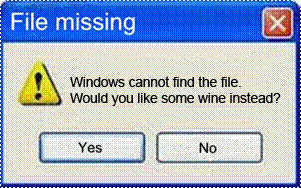 13. I keep some people's phone numbers in my phone just so I know not to answer when they call.  That’s valuable intel.  To me, Caller ID is the greatest invention ever.  And because of the wireless receiver that you can take with you, I don’t even have to get up to know who I’m ignoring.
14. I think the freezer deserves a light as well.  Right!  Why wouldn’t we need to see in the freezer too?  I think that’s why we so often find those frozen artifacts that have been in there since 1986.
15. I disagree with Kay Jewelers. I would bet on any given Friday or Saturday night more kisses begin with Miller Lite than Kay.  Or a shot of Jaegermeister or similar concoction of girly drinks masquerading as “shots.”  To be considered a shot, it has to taste like fire.  The ‘burn’ means it’s working.
16. I wish Google Maps had an "Avoid Ghetto" routing option.  Of course, then I’d never be able to get around anywhere in Baltimore.
17. I have a hard time deciphering the fine line between boredom and hunger.  That’s a new habit for me… mindless munching.  I never used to do that.  Of course, I could barely afford “dinner” at the time, let alone snackables.
18. How many times is it appropriate to say "What?" before you just nod and smile because you still didn't hear or understand a damn word they said?  From me, they get twice.  Sometimes I’ll even take my earphone out.
19. I love the sense of camaraderie when an entire line of cars team up to prevent a jerk from cutting in at the front. Stay strong, brothers and sisters!  I’ve only seen that happen once around here.  In Maryland, everyone is trying to cut in at the front.
20. Shirts get dirty.  Underwear gets dirty. Pants? Pants never get dirty, and you can wear them forever.  Amen.  I have a pants rotation in that I don’t wear any pair of pants more than once a week.  Therefore, unless there’s some kind of spill or accident, they don’t go in the laundry more than every 6 months.  OK, some black slacks get to looking dusty, so I’ll toss them in the wash a little more often.
21. Sometimes I'll look down at my watch 3 consecutive times and still not know what time it is.  I’d like to say that was another byproduct of getting old (er) but I’ve always done that.
22. Even under ideal conditions people have trouble locating their car keys in a pocket, finding their cell phone, and Pinning the Tail on the Donkey- but I'd bet everyone  can find and push the snooze button from 3 feet away, in about 1.7 seconds,  eyes closed, first time, every time.  Sorry, on this one, I have to go another way.  I never use the snooze.  I wake up gradually to the radio because  I want to hear the news when I wake up.  Unfortunately, by the time I’m actually out of bed, I can’t remember a single story.  (See previous entry.)
23. The first testicular guard, the "Cup," was used in Hockey in 1874 and the first helmet was used in 1974. That means it only took 100 years for men to realize that their brain is also important.  This should not be a surprise.  But I can tell this was written by a woman, because any guy would tell you that given a choice between a taking a puck in the melon, or one in the ‘boys’, we’ll take the head shot every time.  It has nothing to do with brains, just the avoidance of excruciating agony.
Posted by bluzdude at 6:42 PM