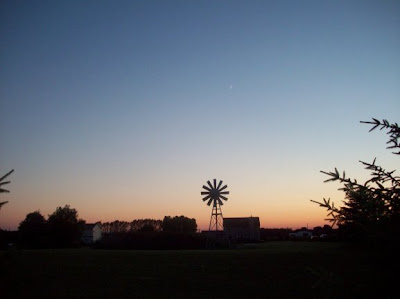 Do you remember that episode of Star Trek-Next Generation when the android “Data” was summoned to his home?  His creator had inserted some circuitry that would make him drop everything and return, at all costs?
That’s kind of what happens to me every summer.  Sometimes I go in May, other times in July, but once a year, I just have to go back.  I leave the modern conveniences and high-energy life of the city… 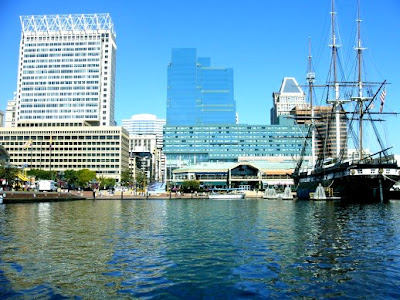 …for the rustic environs of Whitehouse Ohio.  (Population WTF?) 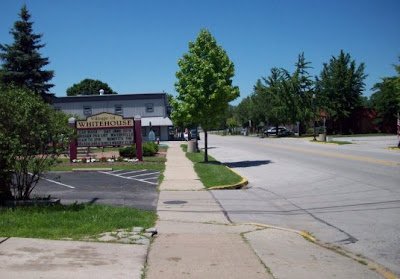 See that picture?  That was downtown Whitehouse on the afternoon I arrived last year.  It was so funny because we drove up the bar eatery in town, hopped out of the car, and there was just NOTHING.  No cars moving… no people walking… just nothing.  Welcome home Bluz!  I might have even seen a tumbleweed. 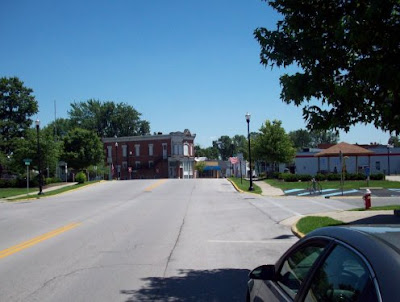 Same shot, other direction.
OK, technically, Whitehouse wasn’t home, but it’s where my buddy lives, with whom I’ll be staying.  My other buddy lives in the thriving metropolis of Waterville.  I consider Waterville the thriving metropolis because it has TWO bars and a Little Caesar’s. (oops... Little Caesar's is gone.)
My old town was smaller than either of those, unless you count acres of open fields.  The Monclova “business district” consisted of an elementary school, a gas station, the post office and a flashing yellow light.
Our primary activity while I’m visiting is standing around John’s garage (aka The Dad-Cave) drinking beer and shooting the shit like you see in the opening credits of King of the Hill. 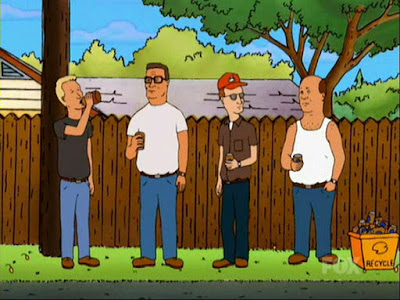 Yep.
Grilling is the other pastime.  John is a real Grillmaster.  I talked to him last week and learned that he has a new grill and has thus far planned to grill a brisket, a pork loin, chicken quarters and steaks.  There may also be various potatoes or vegetables involved, which I consider merely diversionary.  The more others fill up on veggies, the more meat for me.
The nights out there are incredibly quiet.  Away from the glare of the city lights, I can reacquaint myself with the stars.  That picture at the top of the post?  That’s right across the street from where John lives.  It’s all just so peaceful.
We have tickets for Friday night to go see the world famous Toledo Mudhens. 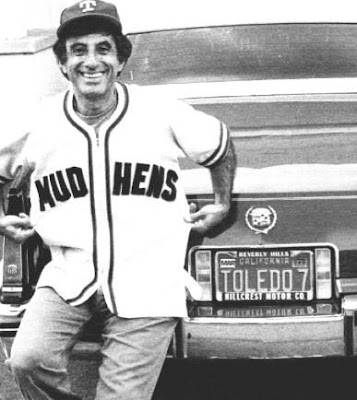 Toledo’s most famous export, besides Tony Packo’s hot dogs.
Naturally, the only time rain is in the forecast is Friday and Saturday night.  But we didn’t have any choice on the game… Friday night is the only time the Hens will be in town while I’m there.
One of the things I love about going back home is the bar prices, especially in comparison to Baltimore.
For example, when John picks me up at Detroit’s airport (flying Southwest to Detroit is about half the price of flying directly into Toledo) we head straight back to a local bar back in Waterville or Whitehouse.  John’s dad usually joins us, as does Rik.  We’ll each get lunch, along with 2 or 3 beers apiece.  The bill comes to like $25-$30.   I just cackle like a fiend and grab it.  In Baltimore, lunch for 2 in my customary downtown bar, with NO drinks, costs about the same.  Going home lets me be all Big Spender!
Domestic bottled beers are usually around $1.50, all the time.  Dinner specials are great too… all you can eat fish, 25-cent tacos, $5.00 hamburger and fries (for a burger the size of your head)… if we’re not grilling out, we’re eating a bar somewhere.
At least once while I’m there, we try to do a little pond fishing.  (With permission, not like the time in this story.)  Last year, we caught a few nice bass, but mostly pulled out nothing but small bluegills, so we just caught and released.
Another activity will be holding the Whitehouse Cornhole Championships.  Now before you get your eyebrows all raised, by “cornhole”, I’m referring to the beanbag-toss game, as opposed to anything else that may have happened in the movie “Deliverance.”
I’d never heard of this game until about 5 years ago, when I visited my sister in Cincinnati and this game was all the rage.  The name comes from how they stuff the tossing bags with dried corn, and try to throw it through a hole in a board from 30 feet away.  It’s like horseshoes, without the chance for serious injury.  We love playing Cornhole, mostly because you can play it with a beer in your hand. 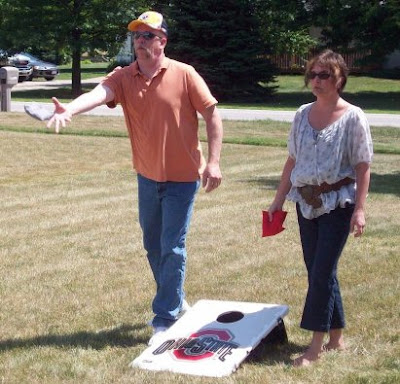 John, throwing some Cornhole, while Bluz Sister awaits her turn.  OK, so the beers weren't in hand, but they were close by.
Now, you can see people playing Cornhole in stadium parking lots all over the country, and even order your own equipment in football team colors.
Speaking of Cincinnati, we may try to take a road trip to visit my aforementioned sister, to take part in the Intra-State Cornhole World Series.  Two years ago, my sister and I destroyed Rik and my brother-in-law something like 10 games to 1.  It was brutal, especially the way my sister rubbed it in on Rik.  Losing to her (and me) at anything bothers him down to a molecular level.
So yeah, I’m really looking forward to this year’s trip.  Now about the blogging…
I had this blog last year when I went out there, but what I didn’t have were readers, so I didn’t have to worry about posting.  This year I’m going to try to post some updates and pics and stuff from my buddy’s computer.  He has a Mac, so that should automatically make my posts more hip, dazzling and graphically pleasing, providing I can work the damned thing.  There’s a lot of “down time” out there, like mornings before it’s time to start drinking.  Anyway, I’ll make it up as I go.
As if I haven’t been doing that all along…
Posted by bluzdude at 6:43 PM