Pinky spent the night at her place yesterday so I had the night to myself.  After catching up on all the crap I had DVR’d while hockey games were on, I decided to put on a movie.

As you may know, I love horror movies, especially monster movies.  It occurred to me that I hadn’t seen one of my all time favorites in quite a while: Note:  If you have never seen this movie and you do have plans to, stop reading right now, because I will be discussing dialogue and plot points.  By all means, see it!  It’s freakin’ brilliant.  And I can’t be too concerned about spoilers when the movie’s been out since 1981.

As much as I love horror movies, Pinky hates them.  She gets squeamish any time someone dies on a TV show, or God forbid, they show a dead body.  It’s kind of hard to have a scary movie without those.

But still I try to find an angle to get her to watch the good ones with me, like American Werewolf in London.  So I’m thinking, “Maybe if we just zap the first killing, (which is by far, the worst one), she’ll go for it.”

The thing I love about this movie is that it is as funny as it is scary, so much so that it John Landis couldn’t get it made until he became a big enough director.  It wasn’t until he made Animal House and The Blues Brothers that he could persuade the movie execs, who didn’t know how to market the movie, that it would draw.

So I figured I’d watch this movie I love, with an eye towards whether I can self edit it enough to make it Pinky-Palatable.

The premise of the movie is that a werewolf attacks 2 young guys backpacking across England.  One guy, David, (played by former “Pepper” David Naughton) is wounded while his friend, Jack, (played by Griffin Dunne) is killed.  As everyone knows, those that are wounded by a werewolf are destined to become one.  So at various intervals, Jack appears to David to try to convince him to kill himself.

One of my favorite lines comes right at the beginning, when David is in the hospital.  Two nurses are lingering in his room when a very proper British doctor comes in and wants them to go on about their business:

Doctor:  Surely you perform some function here at the hospital?
Nurse:  Yes, Doctor.
Doctor:  Then get on with it.

I used to actually use that line when I was a store manager and my staff was loafing, but unfortunately, it didn’t come off nearly as much “dry wit” as it did “me being a prick”.

When Jack first comes to visit David, he appears in the state he was in immediately after he was attacked.  In other words, pretty much shredded.  It is an incredible make-up effect. 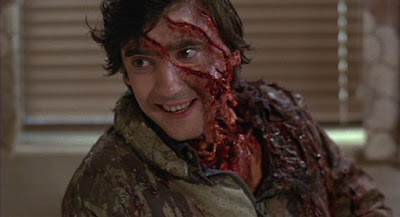 It’s funny because the actor, plays Jack so cheerfully, even when he looks grotesque.  And all you can do is focus on that one little wiggly piece of flesh hanging off his neck.   Nope, there’s no way Pinky could handle the wiggly piece.

The nurse that ends up taking care of David is played by the very yummy Jenny Agutter. 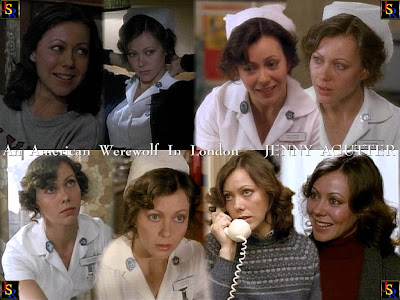 According to the commentary track to the DVD, both young actors had it bad for Miss Agutter, but apparently she wouldn’t give either one the time of day.

She patiently tells him that he’s dreaming and his dead friend couldn’t possibly be talking to him.  Which brings me to the dreams… David keeps having these bizarre dreams, the worst of which involves his family getting killed by a horde of Nazi-themed ghouls while he is forced to watch. 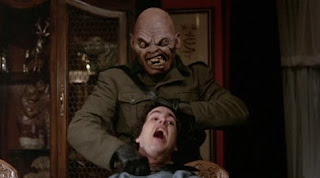 Nope, can’t have Pinky watching that one… I’d have to edit that one too.  Which is a shame because it sets of one of the best bits… As David wakes with a start from that dream, he finds yummy Nurse Alex at his bedside.  She decides he needs a little sunlight and as she pulls the blinds open, another Nazi Ghoul pops out and stabs her repeatedly.  Then he wakes up again, saying, “Holy shit!”

First time I saw that sequence, it was a huge shock, but it was brilliantly done.  David wasn’t the only one going “holy shit!”

Nurse Alex takes David home to her flat… I wonder what kind of HMO he has… I want some of that…  Then it’s time for the love scene.  The music they used for it, “Moondance” by Van Morrison, was perfect.  Believe it or not, seeing the movie was the first time I’d ever heard it.  I was still on college radio at the time so I started playing it regularly after that.

After the lovin’, Jack appears to David again.  He’s still shredded, but this time he’s starting to turn green.  Again, he tries to get David to kill himself, before he kills others.  This is when David comes up with my favorite line in the movie: “I will not be threatened by a walking meatloaf!” 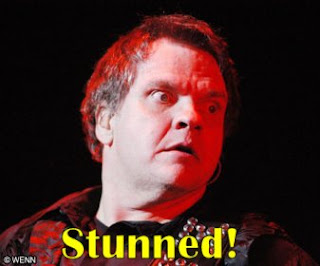 The high mark of the entire movie comes when Alex leaves David at her apartment while she goes to work, and that evening, he turns into the werewolf.

The transformation scene is breathtaking.  Every scrap of the change was done right there, physically, on screen under bright lights.  Remember, this was 1981, there was no computer-generated animation.  You see his hand and feet elongate, the hair sprout, ears pop out, and most nauseatingly, the nose push out into a snout.

And even amid all this, they still bring the funny.  As he’s changing, David looks up at the Micky Mouse doll Jack had been holding earlier and says, “I didn’t mean to call you meatloaf, Jack.”

Now we’re onto the montage of werewolf attacks.  This part, I think Pinky could tolerate.  For the most part, all you see is a quick cut of the wolf’s jaws, then you’re off to the next scene.  Although there is a rather harrowing sequence in the London Tube, but it is not bloody.  Then the next thing you know, David wakes up naked at the zoo, in the wolf cage.

Escape from the zoo is funny, as the naked David pinches some balloons from a young boy who is wearing an Angus Young schoolboy suit.  The boy then goes up to his mum and says, “A naked American man stole my balloons.”

OK, that’s not really funny unless you see it.

David doesn’t remember anything from the night and is alarmed when he hears that there have been 6 horrible murders across London.  He approaches a bobby to try to get arrested, but surprisingly, the copper won’t arrest him.  He tells him to watch his language though.  Figuring this was his ticket to a nice secure jail cell, he starts yelling to the crowd:

“Queen Elizabeth was a man!
Winston Churchill was full of shit!
Shakespeare’s French!  (I love that one…)
Fuck!  Shit!  Fuck!  Shit!”

David facetiously thanks Jack for this “meeting”.  The subway guy turns and says, “This isn’t Mr. Goodman’s idea.  He is your friend, where as I am a victim of your carnivorous lunar activities.”

It’s all so perfectly buttoned up and British.  How is it that the British are able to speak without moving their jaws? 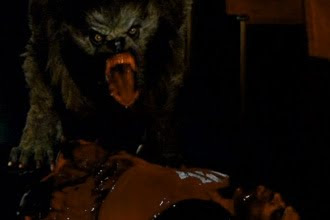 The bobby exits immediately and slams down the roller door outside the theater.  As a crowd forms and more bobbies appear to help hold the door, the wolf breaks through and immediately bites the head off the police inspector, which goes bouncing off the hood of a car and into the street.  OK, going to have to edit that too… Pinky is not down with the rolling heads.

The final scene plays out in a darkened alley where the wolf has been cornered.  Nurse Alex breaks through the police line (the police aren’t having a very successful night, are they?) and runs down to talk to “David.”

Tearfully, she tells him she loves him.  You see the wolf’s snarl relax just a bit, as if all the anger has left and he’s about to curl up in a corner.  An instant later, he roars and lunges for Alex, as shots ring out from the police.  Alex melts into tears as the camera reveals David’s bullet-riddled body.  Then…

Jump cut to the credits, as the most cheerful versions of “Blue Moon,” ever, is played.  (The doo-wop version by The Marcels)  In the theater, you’re just sitting there going “WTF?”  You just saw the guy you’ve been rooting for during the last 90 minutes get killed right in front of his girlfriend.  No wonder the movie execs didn’t know what to do with this flick.  It goes against all the rules of storytelling.  But that’s what makes it great.

Not for Pinky though.  I realized I won’t be able to sell this one in a million years.

One last story… I saw this with my buddy Brill when it first came out.  It was a damp, foggy day and when we got home, Brill had to walk two lots down to his house.  There was a big abandoned field in between and it was all overgrown.  For a moment, I had this wicked thought that I should quietly run around behind the lot and creep up into the field.  When Brill walked by, I would howl, like in the movie.

Then I remembered Brill’s heart condition… probably wouldn’t have been the greatest idea.  Poor Brill would have keeled over right there.