The Elf and the Leprechaun

This Friday, I’m making my annual pilgrimage back to the farms of Northwest Ohio, where I grew up.  I’m going back to see my best buddies… the guys with whom we started The Barn.  It’ll be a nice long trip, going out Friday, staying the week and returning the following Sunday.  It’s a total “Guys Week”, which is something I need once in a while.  Sometimes you just have to get away to drink, burp, scratch yourself, drink some more, see ballgames, play some Wii, do some fishing and grill every meal. 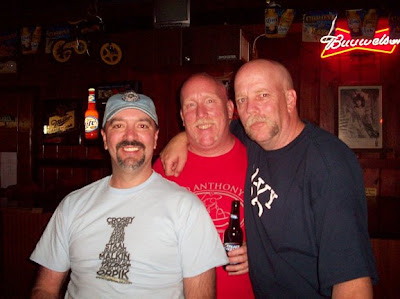 Both of the guys I’ll see out there, John and Rik, have families.  When I first left town, John’s two boys were very young.  I pretty much missed seeing them grow up.  Even though I was relatively close by in Cleveland, my life was just jammed with working.  My few vacations were usually spent visiting my parents, so I didn’t get back to Ohio very often.  It was worse, once I moved to Albany.  I probably only saw the guys twice in 7 years… when they came out for my wedding, and when I went back home for Brill’s.  It was too far to drive and I sure didn’t have the cash to be flying back and forth, especially after getting married.

Once the marriage ended though, I was determined to reconnect.  By this time, Rik had two young daughters.  I may have missed John’s boys growing up, but I wanted to make sure that didn’t happen with Rik’s kids too.

When I first went back in 1997, Rik’s oldest, Kia, was a 6 or 7-year-old leprechaun.  She was a redhead, like her dad, and was likewise self-assured and fearless.  Rik told me a story of looking out to their field one day, when Kia couldn’t have been more than 3 or 4, and saw her standing on top of one of their horses (a gentle old mare) reaching to pick an apple out of a tree for the both of them to share.

Outside of from when she was a baby, I first saw her at Brill’s wedding the year before.  We got along splendidly, even sharing a dance to Clapton’s “Wonderful Tonight”. 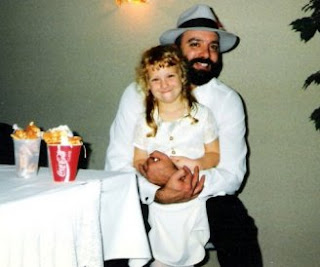 Kia and I at Brill's wedding in 1996.  Notice the two cups full of  little angel ornaments.  Kia and another girl were picking them all up off the tables because they thought they were unwanted.

The younger one, Kyrie, was a little 2-year old elf with white-blond hair.  I saw her at the wedding too, but she was barely a toddler.  She didn’t remember me, of course, but she saw that her sister paid me a lot of attention, so she did as well. 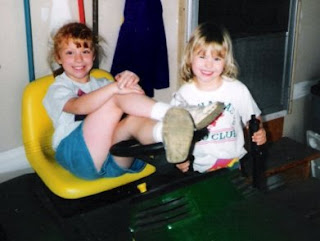 Those first couple times I went out to visit, those two girls climbed me like a jungle gym.  I don’t think Kyrie’s feet touched the ground the entire week… she was always either on my lap, on my shoulders, or riding on my hip.  The both of them had me completely wrapped around their little fingers.  I’d show up with presents for them, usually CDs or videos of Brittney Spears or the boy band du jour.  Their dad told me it would take him a week to reprogram them after one of my visits. 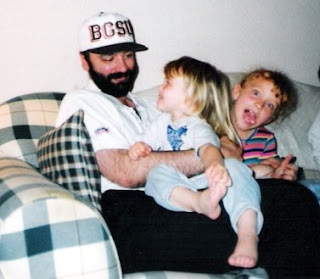 I didn’t care.  I would leave there every time with my heart all filled up.  It’s like, when a little kid gives you that blast of love, it’s just so pure and unrestrained that it just knocks you for a loop.  If you’re a parent yourself, I’m sure you know what I’m talking about.  I bet it’s what keeps you going during the crabby, crying, stressful times.

The Gar-Girls, as their dad called them, were smart enough to know that they could get away with most anything when I was there.  I remember that first year, they had me sleeping on a foldout couch in the split-level den, right off the kitchen.  Early one morning, (like 8-ish, which is early when you’ve been up drinking and carousing all night) I heard a noise and opened one eye.  I could see, backlit from the kitchen, the little elf peering down at me from between the dowels of the border railing.

I waved to her and she came running down.  She put on the TV and hopped into the bed beside me.

“Uncle Bluz,” she said, (my buddies and I are all “uncles” to each other’s kids), “can I have some cereal and watch cartoons?”

I said, “Is that what you usually do?”

It was fine with me, so off she went to grab a box of cereal.  She returned with it and we sat up in bed to watch TV.  Shortly, the leprechaun came down too, and hopped into the bed on my other side.

Now this was Living Large… sitting there with two adorable little chilluns snuggled up to me, munching cereal and watching cartoons, the very picture of family happiness.

Then the mama came down.  “Kyrie!  What are you doing with cereal downstairs???”

Uh oh.  Busted.  Apparently, she wasn’t exactly allowed to have cereal down there.  Tricked by the Gar-girls, I was.  Live and learn, the mama said.

I never knew how much fun it could be to be around little kids.  Every time I visited, one of them always did something that just slayed me.

I used to always show up there wearing my Steelers stuff… shirts, hats, whatever.  One time we were visiting at John’s house and Kyrie found a Steelers pillow there.  She brought it over to me and said, “Uncle Bluz, he-ews your pillow.”

I said, “That’s not my pillow, that belongs to Uncle John,”

Later, she asked me, “Do you wear hats all the time because you’re bald?”

OK, I get it… kids will say anything… no filter.  But sometimes it’s just so damned cute! 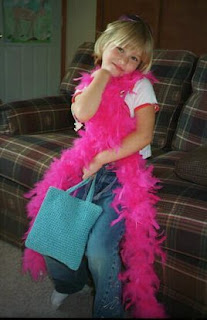 That same trip, I learned that they call cinnamon gum “hot gum.”  So I was chewing some gum of my own and Kyrie asked if she could have some.  After checking with Dad, (Uncle Bluz learns fast) I said "of course".

I was no more good…

The Gar-girls were as different as night and day.  Kia, as I mentioned, was always the independent one, bold, brassy and the world's foremost authority on everything, ever since she could talk.  She was also expert at work avoidance, with more reasons than you can imagine for why she couldn’t possibly do her chores at that particular moment. 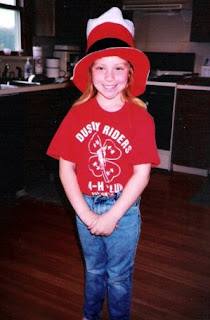 When she was 10, she was allowed to fly out visit me in Baltimore for a couple days.  I swear, we did more things in town than I’d done in the 4 preceding years I lived here.  We went to an Orioles game, the National Aquarium, the Inner Harbor with the ESPN Zone and Hard Rock Café, bowling, ice-skating, swimming with my brother’s family… I was worn out, although not so worn out that I agreed to her request that we take a cab to go the (mere) 5 blocks from the Harbor back to the subway.

So as we were sitting at the airport, waiting for her return flight to board, I asked her, “So, what was your favorite part of the trip?”

Now, she tells me.  Hell, I could have saved about $200 and just rented some videos.  Actually, I think her favorite part was that she got to come and her sister didn’t. 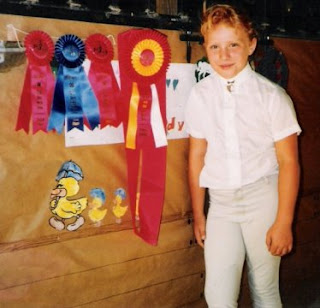 Kia was a born horse-girl.  This is from 1999 when she was competing in the county fair.  She did well, if not as well as she expected.  She ascribed the lack of a clean sweep of wins on her part to a complete lack of evaluation skills on the part of the judges.

Sister Kyrie was another story.  This child was the drama queen and fashion plate from day one.  The kid was a natural poser.  I used to take a lot of pictures when I came out and both girls loved to have their pictures taken.  But Kyrie used to pose like she’d been modeling for years. 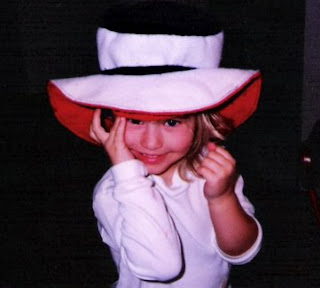 I did not pose this child.  I picked up the camera and this is what she did. 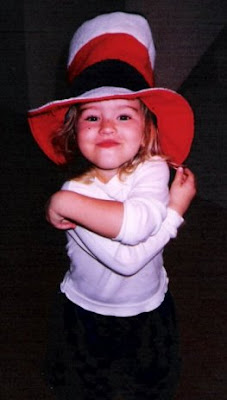 Who knows where she picked this stuff up, at age 3!

Kyrie had a willful streak as well, but if you ever raised your voice to her, she would just dissolve into tears, looking like you just killed her puppy.  It was quite an effective defense mechanism… on me, anyway.  I think her folks got past it pretty quickly.

Sadly, Kyrie never got to come out for a visit… 9/11 occurred shortly after Kia’s visit, so that put the kibosh on any more plane rides for the following years.  Then the next thing you know, the girls went flying past that age where the grownups just aren’t that interesting any more.

So on this year’s visit, like my visits of the last several years, the girls will come by for a quick visit, then they’ll be off to hang out with their friends. 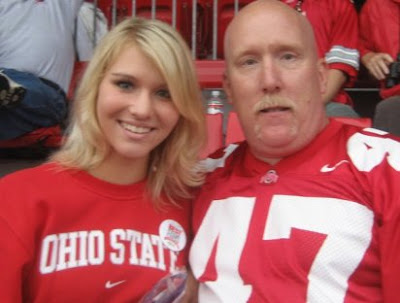 This is Kyrie, last fall, with Daddy Rik.

Kia is off on her own now, but unfortunately there is some bad blood between her and her family.  I probably won’t see her this time.  I suspect that willful streak has something to do with it.

Kyrie is 15, but could pass for much older.  They have a brother now too, Jake, who is a big, strapping 10-year old, who can also pass for older.  The boy doesn’t say much, but I ascribe that to not being able to get a word in edgewise for most of his life.  Kid’s going to be a hell of an athlete though, like his old man.

All the kids seem so grown up, but I swear, no matter how old they get, I can’t help but see them like this: 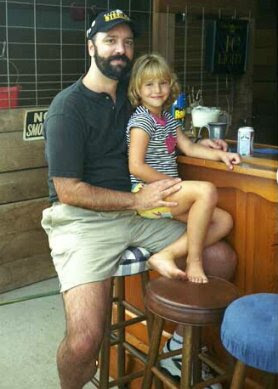 From 2001, at our Barn Reunion.  This shot was in their actual horse barn, while we're sitting in front of the bar from our old Barn.

As I have more pictures I wanted to use than I had ways to work them in, I’m just going to run them. 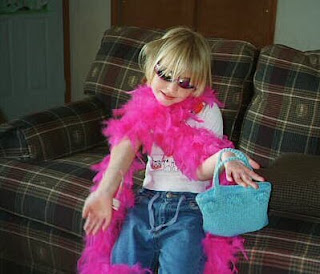 She's ready for her magazine cover, I guess. 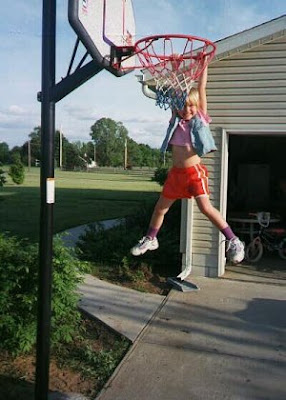 She's got hops, too! 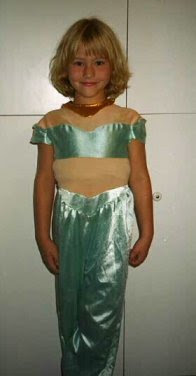 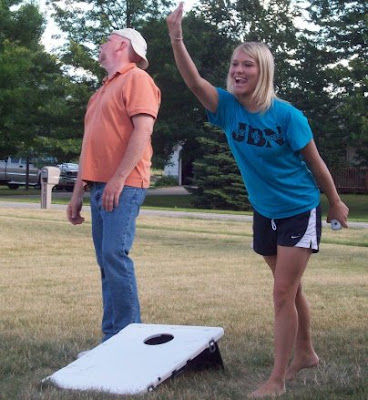 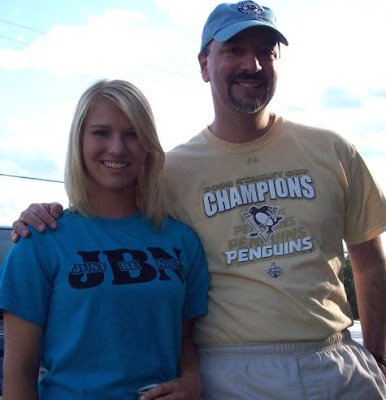 Beauty and the Beast.
Posted by bluzdude at 8:59 PM