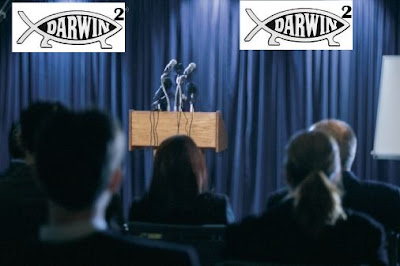 At the Podium: Penguins fan known as “bluzdude”.  He is wearing a dirty, torn Penguins tee shirt and a Penguins ball cap, which is askew.  Though freshly showered, he appears to have a 2-day beard growth, a bad mullet and looks haggard.  Girlfriend “Pinky” stands just off his right shoulder, looking glum.
Full Text of the Prepared Statement:
Ladies and gentlemen of the press, members of the blogosphere, Penguins fans everywhere and the players and coaches of the Pittsburgh Penguins,
As you know, on the night of May 12th, the Pittsburgh Penguins lost Game 7 of the Stanley Cup Semi-finals to the Montreal Canadiens.  I stand here today, before you, to state unequivocally before you, that I alone accept the blame for this tragic turn of events.
Some may say that it was poor goaltending that led to this playoff ouster.  Other say it was a lack of scoring by the Penguins’ young stars.  Still others point out a lack of defensive responsibility.  But I’m here to tell you that the Penguins lost because of my lackluster effort in Mojo Execution.
While it has always been my intent to represent the Penguins organization with class, attention to detail and devotion, I admit that I was off my game for this series.  I allowed myself to be put into positions where I was doing what was best for me and what felt good at the time, instead of focusing on what was best for the team.  I was out performed, out rooted and out mojo’d by the Montreal fans.  That is something that just can’t happen and I’ll have to live with it for the rest of my days.
I’ll take your questions now.
Reporter: What did you do to cause the playoff collapse?
bluzdude: First of all, I admit that I was completely irresponsible for celebrating too hard over the loss of the Washington Capitals.  There was smiling, giggling and even the posting of jokes on my own blog.  This just can’t be allowed to happen.  And I know better than that!  I know that celebrating a foe’s defeat, especially a defeat to your future opponent, is a complete invitation to the Hockey Gods to produce a karmic smackdown.
Reporter:  What actions are you taking to prevent such an outbreak in the future?
bluzdude:  Immediately following this press conference, I’m checking myself into the Pat Robertson International Clinic for Kicking Schadenfreude, more commonly known as “PRICKS”.
Reporter:  Were there other areas you can specify where you were responsible for the team’s failure?
bluzdude:   During the Montreal series and even going back to the Ottawa series, I was not able to properly identify game jersey or tee shirt trends.  I went to the well too many times with the same jersey where I should have been able to better read the data and make adjustments.
Reporter:  What about in-game adjustments?
bluzdude:  In-game apparel changes never work.  The only recognizable effect comes from pre-game preparation and I have to admit that mine was severely lacking.  I should have been able to spot that each jersey I wore was only good for one win.  Our losses came when I tried to wring a second win from the same jersey.  It was a rookie mistake and I should have been able to read the tea leaves there to make game-to-game adjustments.
Reporter:  Was there anything else?
bluzdude:  Yes, probably the worst thing.  (heavy sigh)  I was unprepared for the start of Game 7.  When the puck was dropped, I was still at my computer, pecking away on my puny little blog.  Then during the time I was in my room, putting on my jersey, Sid took that boarding penalty.  And when I went into the kitchen to pour my night’s libation, Montreal scored their first goal.
I know it was only 30 seconds into the game but that, my friend, is a lack of preparation on my part and like I said, it’s something that I just can’t allow to happen.
Reporter:  Is it true that you improperly touched your Penguins Gnome before the Pens’ first home loss?
bluzdude:  No, that’s enough for right now.  My agent will have more for you in the morning.  All I can say right now, to the boys in the locker room and the entire Penguins Nation, is that I’m sorry.  I know better than to behave like this and I will do everything in my power to make it up to you next season.  Thank you and goodnight.
Posted by bluzdude at 7:09 PM

I will say that it wasn't just you. If you remember correctly, my husband, who shall remain nameless, was in Montreal drinking CANADIAN beer.

Cassie,
I appreciate your man standing with me. It is a heavy load we bear.

And yeah, I might have had to adjust the position of Pens Gnome (as seen in this post: http://darwinfish2.blogspot.com/2009/10/road-trip-bluz-pt-2-heinz-field-edition.html )
But upon advice from counsel, I can neither confirm nor deny.

I hope you learned your lesson!

I accept the consequences of my actions, and hope to move forward, putting this whole sordid affair behind me. I now request that the press and paparazzi grant some much-needed privacy to my family and me, at this very trying time.

So it was you AND Mr Glasses. Hmph!
This is truly unacceptable, Bluz. I do hope that next year you will keep this in mind and be more prepared.

Yes, a shocking outcome to that series. Now I know the reason.

Going to the well too many times.

I accept partial responsibility for the Capitals gloating alongside you. My wife might have described it as "laughing like a maniac," but keep in mind that English isn't her first language.

Well, time to move on. Let the Penguins heal up from two very long seasons, let them learn from this and play the way they need to in 2010-11, and let the Sharks win the Cup!

Woman & Lilo,
I will do my best to ensure that nothing like this ever happens again. I have a cousin on the Coraopolis police force that I will now employ to make sure that I am focused and on my game next season.

I appreciate that I now have Cassie's husband Matt, Mr. Glasses, and now Lilo standing with me. There is strength in numbers.

Guy,
I'm sure you're all pretty shocked up there in New England, at your Bruins' epic collapse. I am bummed about it myself.

I'd root for a team put together by Al Queda over any team from Philadelphia. And if the Queda team were to lose, at least they would have the decency to blow themselves up afterwards.

Anything to help, Bluz. Regarding the Al Qaeda team comment:

1. I just laughed myself sick at the mental image of an Al Qaeda hockey team.
2. Montreal fans will probably blow up the city--does that count?

So glad it's almost race time!

I don't have any respect for a fan base that riots just for getting into the ECF. Of all fans, they should know how to act like they've been there before.

I'm willing to let you take the fall for this one, bluz. I did my part and fell asleep on the couch in the third period as I have every game of this playoffs. If that wasn't enough to give them the mojo they needed, it just wasn't to be. (what do you want? i'm still having first trimester fatigue.)

What will you be doing this off-season to up your game for next year? Reorganize the closets? Get rid of ineffective producers? Look for a free agent jersey or two? Improve your gnome-handling skills?

Boston is such a baseball town. I was at a bar to hear my friend's band play, and the Stanley Cup was on. Music was turned off, the Bruins lost, music was turned back on. No drama. I'm sorry for your loss. Work on that schadenfreude thing, eh?

RPM,
Yes, I will take the abuse, to spare the women and children. Although that explains all the times we blew 3rd period leads. Perhaps next season, the baby will help keep you awake for the ends of the games. Can you feed the baby AND root for the Pens at the same time?

Bagger,
I will be consulting with a noted mojo coach at the prestigious Carville Mojo Institute. I will also look into the acquisition of some new free agent jerseys, but not until they unveil the new “3rd jerseys” for the 2010-11 season.

As stated before, I am unable to comment on any alleged “gnome” issues, although I respectfully maintain the right to seek Gnome Ice Advantage.

Bachelor Girl,
(whispers… That one totally came together on the fly… I had Pat Robertson and Schadenfreude and was kicking around the rest of the language when I realized that I could try to spell something. Thanks for being the first to spot the genius!)

Sugar,
Bahstin is having quite a run, this decade, between the Sox, the Pats and the Celts, they've been making some hay. Too bad the Broons couldn't join the party.

God, how I hate Philadelphia... I will not be able to tolerate their defiling the Stanley Cup by winning it. I don't want to even THINK about what Hartnell would do with The Cup on his day...