A Life on the Move

I was just thinking, this morning, that I’ve now lived in Baltimore and in my particular apartment, for over 12 years.  That’s longer than I’ve lived in any one place throughout my entire life.
My dad moved us around a lot when we were kids, always in pursuit of better jobs, to better take care of our family.  It’s no surprise that I ended up doing the same thing myself.
We started out in Pittsburgh, along with everyone on both sides of my family.  In 1968, when I was 6, Dad took us over the wall and we lit out for Chicago, settling in Glen Ellyn, a western suburb.
This move is what I blame for my lousy handwriting.  In Pittsburgh, I was in second grade and we were still printing.  When I started 3rd grade in Chicago, everyone was already writing in cursive, so I was pretty much just tossed into it without much training.
We lived for 2 years there before moving to Bexley, OH, a suburb of Columbus.  We were only there for 1 year before moving to another area of north Columbus, where we lived for 4 years.  That was a great neighborhood for kids.  There were lots of kids in the neighborhood, a huge community pool and a mall within walking distance.  We rode our bikes everywhere.  Every summer morning, we’d disappear outside, maybe turn up again for lunch, and Mom wouldn’t see us again until dinner.  Then we’d be back outside to play Hide & Seek or Kick the Can until the other kids got called in.
I don’t remember ever having a curfew… I think my parents were just as happy to have us out of the house.
After my 9th grade year, we moved up to the farmhouse in Monclova OH, a hiccup of a town to the west of Toledo.  We lived 10 years there, although I had a couple apartments of my own after college.  As I mentioned in my End of the Barn post, Mom and Dad moved to Baltimore in 1986.
Since I was out on my own and working at the record store, I remained behind.  My brother was at Ohio State and after he graduated, he joined my parents in Baltimore.  My sister was living with a boyfriend eventually did the same, once it ran its course.
In 1986, I left everything I knew behind to move to Parma OH, for the opportunity to manage my own store.  I lived there for 4 years, in 2 apartments, until I moved to Schenectady NY, for a chance to be in the same market as my company’s home office.
Eventually I did catch on at HQ, as described in my “Brushes” series of music biz adventures, from March.  I got married (cold chill runs down back) and moved to Clifton Park, a suburb just north of Albany and stayed there until the job and my marriage ended.
In late 1997, I was sick of things.  This will be a post of its own one day, but in a nutshell, I no longer had a reason to be there.  I’d always lived wherever I had to in order to work at a particular job.  I’d spent a lot of years and a lot of holidays in towns without access to family or close friends and I was tired of it.  I had a decent job managing a video rental store and was in the process of totally turning it around (in a good way).
But I had no life.  The hours were horrible and my off times usually came when all the rest of my friends were at work.  All I had was playing hockey, but that wasn’t enough to make up for everything else that lacked in my life.
So I made probably the hardest decision I ever made… to quit my job, pull up stakes after 7 years in New York, and move to Baltimore to live in the same town as my brother and sister.  I hadn’t lived near family in over eleven years and wanted to try it out.
My parents were living in Green Bay by that time and I considered going to live there, but 2 things prevented that:
Anyway, I came to Baltimore and bunked in with my brother and his wife until I could get on my feet again.  Not wanting to be a sponge for one minute longer than I had to, I managed to find a job by the 2nd month and was able to move out by the end of January.
That job evaporated pretty quickly though, so my brother managed to get me an interview at his financial services company.  Despite not having a lick of banking experience, I tricked them into hiring me and here I am, 12 years later. 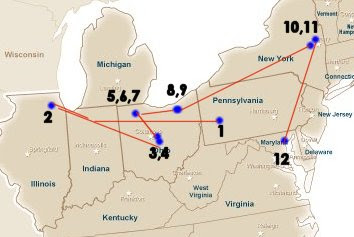 It's not exactly the Travels of Indiana Jones, but it felt like a lot at the time.  The numbers represent different residences.
So… 12 years in Baltimore.  Like I said, it just hit me this morning that this is the longest I’ve been anywhere.  12 years on one apartment; 12 years coming to work in the same building… God, I hope that doesn’t make me a Baltimorean… or “Baltimoron”, as I usually refer to others in town, usually those that are driving in front of me and doing something inexplicable.
So far, my one concession is that I actually follow the Baltimore Orioles.  Hell, they suck just as bad as the Pirates do, so there’s really not much difference, except I can walk down to Camden Yards to see an Orioles game right from work.  And an added benefit of having your team suck is that you can always get walk-up tickets.
Funny though… a couple of years after I got here, my sister up and married her childhood sweetheart and moved back to Ohio.  But I still have my brother here, as well as 2 very special nephews.
I guess this is what putting down roots feels like.  And it’s not bad.  (knocking wood…)
Posted by bluzdude at 6:44 PM