Earlier in the day yesterday, we passed by the first place I ever had a job, Sautter's grocery store. 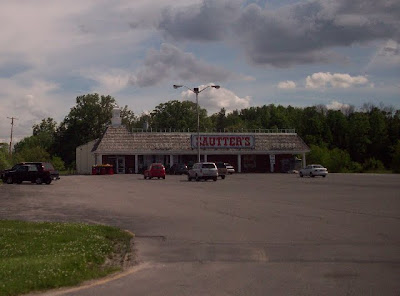 One day that place will get a post of its own, but for now, it was a good place for me to start my working life.  Maybe it's different in other parts of the country, but where I live, you don't see too many small, family-owned grocery stores any more.  I'll never forget when minimum wage went up to $2.65... I thought I was really raking it in!


We went to Jake's baseball game last night and unfortunately, it was one of those games where it was just walk after walk after walk, with an occasional strikeout thrown in.  The first 2 innings took an hour to play, and there were maybe 4 occasions on which someone actually made contact with a pitch. 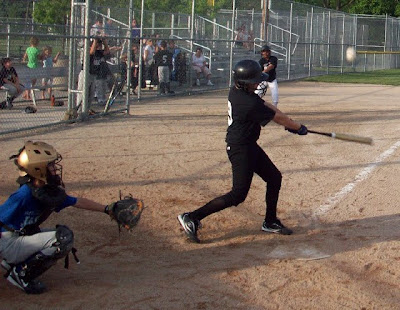 Jake fouls one off, before walking. 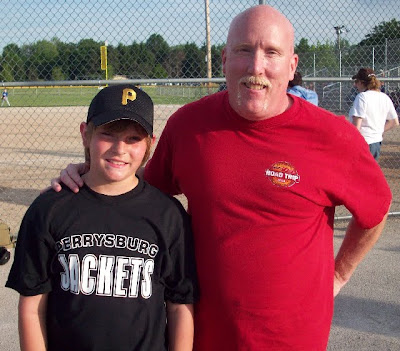 "Sorry I can't stay, kid, but American Idol is about to start."

We made a break for it about an hour and a half in, so that we could get home in time for American Idol.  Well, so that Rik could watch American Idol, which he could not DVR, he said, because he was already DVRing NCIS.


This is where I got to earn my keep, by telling Rik how he could actually DVR 2 shows at once, as long as he wasn't watching something else.  Sadly, I didn't know this was even an issue until we were 10 minutes away from the house, on the way to the game.


John met us over at Rik's place, which had just undergone Spring Planting.  It's hard to imagine that the guy on the right in this pic: 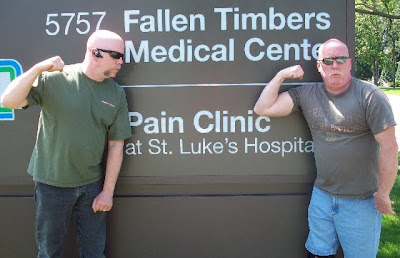 is the same guy that planted this: 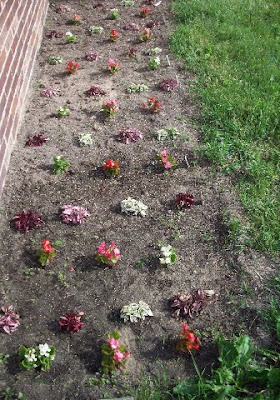 So the 3 of us had a pizza delivered while Idol was on.  As the delivery guy left, John wondered if Pizza Guy was wondering what kind of house this was, with 3 big bald gorillas sitting around watching American Idol.


Later on, during a Fox promo, I clarified... "I'm sure he didn't think we were gay because we were watching Idol.  Now if were watching 'Glee'..."


After Idol, and the DVR'ed NCIS, we went out to Shawn's Irish Pub again and worked on some beers until 11, when they closed.  Next stop was the "other" bar in Waterville, Mad Anthony's." 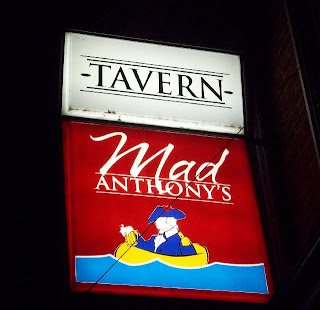 We had a few more beers there, shot the shit, told a bunch of stories, and got home about 1.  Actually, "re-told" is probably more accurate.  I don't think any of us have anything new to cover that we haven't covered a hundred times by now.


There's not a lot on the "schedule" for today.  John and I went out to pick up his car at the shop back in Haskins.  It was a bit too early to stop again at Herbie's Train Depot, which is the name of the place we were at yesterday, that had the model train running and whose name I could not remember when I wrote the last post (and has since been corrected.)


How can you not like a bar called "Herbies", anyway?

I tweaked my back getting up from a chair this morning.  Now it's like I have a shiv stuck in just to the right of my middle vertebrae.  Fuck.  It sucks getting old.  I wonder if a steady diet of beer and Jack Daniel's will help?


John's out doing some yard work this afternoon.  As I was poking around the cupboards looking for something "lunch-like", I came across a delicacy from my post-college years, and found that John was apparently holding out on me. 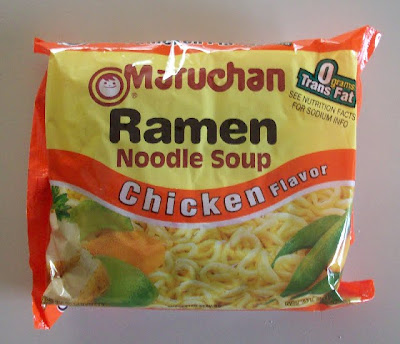 I became acquainted with Ramen Noodle Soup one day while I was living in an off-campus apartment in Bowling Green, with my fiance and a mutual (hot) friend.  I was sick one morning and Fiance was at school, so Hot Friend made me a bowl of Ramen Noodle Soup.  Now having lived at home throughout college, I was unfamiliar with this stuff.  But it was so novel and good to me at the time, I guess I associated Ramen Noodle Soup with mornings and from then on, it became my new daily breakfast, a habit I maintained for a good 15 years.


I loved when I could find a store that had new flavors, but I usually stuck to the basics... chicken, beef, pork and Oriental.  I was never quite sure why it was called "Oriental"... was it supposed to taste like a Chinaman?  I never learned for sure.


I would arrange my soups in the cabinet in a flavor rotation, so I could just take one off the top and I would always have maximum distance from the last time I had that flavor.


Anyway, Ramen Noodle Soup was the one constant through my earliest years as a so-called adult, in other words, The Broke Years.  At like 15 cents per package, it helped stretch my meager dollars. It wasn't always for breakfast, but it was a pretty regular lunch.


I don't think I stopped buying it until a couple years after I moved to Baltimore.  But seeing it in John's cupboard, I knew that my buddies weren't going to be the only old friend from the past I'd be spending time with this week.


Tomorrow we are still scheduled to go see Bluz Sister in Cincinnati, with a return stop on Saturday at World Famous Myles Pizza in Bowling Green.  You'll have to see this pizza to believe it.  I guarantee you that I'll be the only one on Southwest Airlines on Sunday, flying with a carryon filled with cold pizza.
Posted by bluzdude at 3:01 PM