Bailing on the Truth

This week I saw 2 very good opinion pieces.
The first was a simple letter to the editor in the Baltimore Sun that echoes what I’ve been saying for the last year, which I will lovingly type forthwith:
Why no tea parties with Bush’s record deficits?
"Let’s see: The Bush administration inherits a budget surplus, racks up record deficits, and more then doubles the national debt.  No tea partiers.  Through lax regulations, our economic house of cards comes tumbling down and Wall Stree, GM and Chrysler are bailed out by the Bush administration.  No tea partiers.  President Obama enters office on Jan. 20, 2009.  Within about a month, we get the tea partiers.  Perhaps (conservative Baltimore Sun columnist) Ron Smith is correct.  Perhaps there is no racism involved.  Perhaps it’s only stupidity."
F. Mark Walters
I don’t have a lot to add to that, that I haven’t already said.  It wasn’t a problem until it wasn’t their guy in office.  That makes the tea baggers’ “principles” flimsier than George W’s Yale transcripts.
All the crying about taxes cracks me up.  I mean, I don’t like paying taxes any more than anyone else, but it’s the price you pay for services received.  These fuckers want to protest about their taxes (which actually went down for 98% of them), let them get along without public schools, paved roads, unregulated industrial pollution, workplace safety standards, food inspection and regulation, disaster recovery and cleanup, Medicare, Social Security, or defense of the very ground on which they stand.
Unless they want to forego all of the above, they should shut the fuck up and pay their tab like the rest of us.
And if the crowd IS made up of that 2% of Americans making over $250,000, that do see their taxes rise, (who are also more likely that they have representatives appear for them) I say “cry me a fuckin’ river.”  This country has provided the atmosphere for them to make the kind of living that few others will ever see.  They are exactly who should be footing the bill.
If you’re making 250 Gs, I don’t want to hear you crying about money.  Ever. 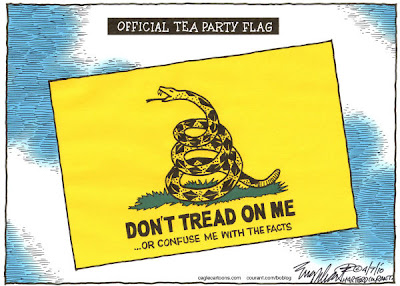 The other article that caught my eye appeared in Salon and talked about how it can be that the Republicans can send guys out there and tell bald-faced, easily verifiable lies to the American public.
The current example was from Senate Minority Leader Mitch McConnell.  To quote from the article:
“Consider Senate Minority Leader Mitch McConnell, R-Ky. For weeks, McConnell has been trying to prevent action on pending financial-reform legislation by claiming that it would lead to "endless taxpayer bailouts of Wall Street banks."
In reality, the proposed law would do exactly the opposite: liquidating failed investment firms' assets through a process like the one used by the FDIC to shut down insolvent savings banks. Management would be fired and shareholders given nothing until creditors had been paid. Wall Street firms would be required to pay into a fund underwriting the arrangement. Taxpayer dollars wouldn't be used.”
The writer goes on to mention how the goal appears to be to get cretins on Fox “News” and talk radio to pick up the sound bytes and run with them.
“The fact that he's engaging in pure doublespeak is highly unlikely to be mentioned. Instead, you'll likely see a snippet from a Democrat making the opposite claim. For an awful lot of viewers, that's like flipping a coin.
For Fox News viewers and Limbaugh listeners, it's actually easier than that. Conditioned by decades of propaganda about liberal media bias, many react with overt hostility to any and all information from other sources. I must get 50 angry e-mails a week calling me a liar for citing some easily verifiable fact at odds with right-wing doctrine.”
What strikes me is the bit about the propaganda about the alleged “liberal media bias.”  By spending years conditioning the undiscerning ears of their viewship to immediately distrust anything that doesn’t come directly from Fox or the Republicans, they have inoculated themselves from ever being proved wrong.  And all that does is perpetuate the Bizarro-World state of Republican politics, where the sky is green, the grass is blue, we kill people to save lives, and put our citizens under surveillance to protect our freedom.
It’s like the spouse-abuser that cuts off his wife from her friends and the outside world.
“I’m all you ever need, honey.  Your friends are idiots.  Your family doesn’t love you like I do.  Sure I have to knock some sense into you once in a while, but it’s for your own good.  You don’t need to ask anyone else, I’ll tell you what’s what.”
That’s Fox News, in a nutshell… A drunk, smelly guy in a sleeveless tee shirt, cuffing some sense into his cowering wife who dares to dares to challenge him by stating what is plainly obvious to anyone with a functioning brain and even a rudimentary sense of right and wrong.
Look what they’re doing with the oil rig collapse in the Gulf.  They know that offshore drilling is their baby, their battle cry.  Now it’s gone tragically wrong and they need someone else to blame.
Naturally, it’s Obama’s fault.  Sean Hannity is already calling it Obama’s Katrina (a line he picked up from Limbaugh.)  There is no reporting about the effects to the economy or Gulf ecosystem, just relentless finger-pointing and dismissal of any who dare to disagree.
He’s even gone so far as to state that if it wasn’t for the Democrat’s prevention of Alaskan drilling, we wouldn’t have to be drilling in the Gulf.  As if there haven’t been oil rigs in the Gulf for ages, regardless of Alaska drilling.
But why let facts get in the way of political fingerpointing?  Just take the word of the guy in the wife-beater.  He’s only looking out for us.
Posted by bluzdude at 12:22 PM