A Boy and His Horse

I watched the Kentucky Derby this weekend, like I always do with the Triple Crown Races.  I can now announce a new betting strategy from which I will never again deviate:  Never bet against the Cajun.

That crazy little coon-ass did it again and I can’t be happier for him.  Jockey Calvin Borel won the Derby for the 3rd time in 4 years.  The sporting world needs more characters like that.  I tell you one thing, you’ll never see a jockey out there getting in bar fights or assaulting women in restrooms.  All anyone needs to defuse that situation is a palm right on the jockey’s forehead, and game over.

Whenever I watch the Derby, I always think back to the first time I remember watching horse racing, as an 11-year old boy in 1973. My dad always watched the Triple Crown races (Kentucky Derby, Preakness and the Belmont) so I wanted to as well.  There was a lot of pre-race hype about a particular horse named Secretariat, a big, beautiful, red galloping machine with three white socks and a white blaze along his nose.

Secretariat won that first race with a Derby record, setting off a month long fascination and frenzy with the big fella and I was caught up right along with it.

I couldn’t wait for the Preakness, to see if Secretariat could take the 2nd leg, and he didn’t disappoint.  The only controversy was whether it was a record or not.  There was apparently a problem with the official track timer, which showed him just short of a track record.

It doesn’t surprise me that there was a problem at that facility.  As it turns out, I live about 5 minutes from Pimlico in North Baltimore and the place is a complete dump.  The first major track I ever went to was at Saratoga, in upstate New York, where they run the Travers Stakes.  The Saratoga facility is an emerald gem; beautiful, tranquil and clean as a whistle.  Pimlico is an embarrassment; more like an abandoned warehouse with a new coat of paint, than a worthy venue for a classic race.  It is now most noteworthy for the den of iniquity that erupts on the Preakness infield every year.  But I digress. 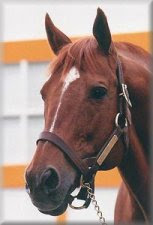 I saw a special on TV once, where they ran a tape of the race alongside a properly calibrated timer.  It gave tangible proof that Secretariat ran the 1973 Preakness in record time.  Not surprisingly, racing officials declined to make any changes to the records.

Screw’em.  We know what happened.  And the next race made that oversight irrelevant.

Every time I see tape of Secretariat’s run in the Belmont, I can’t help but get choked up.  It was just beautiful.  Jockey Ron Turcotte took his big red machine out fast, staying right behind primary challenger, Sham, for the first couple of furlongs and then just took off.

It was like the horse just said, “the hell with these losers, I’m outta here.”

Racing beat writers in the press box thought that Turcotte lost his mind, taking him out that fast, that soon.

Not on your life.  That horse ran like his ass was on fire, getting further and further ahead until he could have trotted home.  But he never let up. 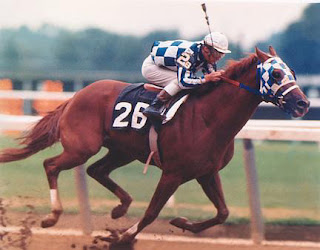 On one of those TV retrospectives, I saw tape of one of the other jockeys, I think it was Lafitte Pincay, who was aboard Sham, say something to the effect that sometimes as a horse tired out, you could see that he’d look smaller.  He saw that happening with Secretariat and thought he still had a chance.  Then he realized that on the contrary, Secretariat looked smaller because he was getting so far, far away. 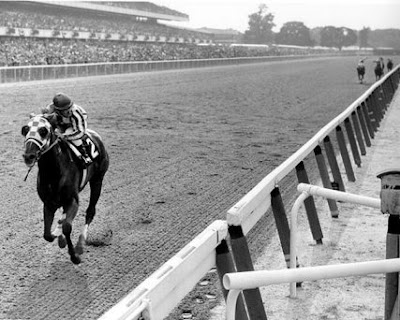 Secretariat won the Belmont by 31 lengths and cut 2 seconds off the record for a mile and a half race, with a time of 2:24.  No other horse in history has ever broken 2:25. 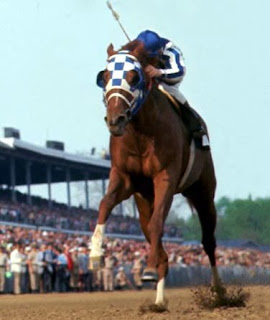 I didn’t know from history at the time, but I think I realized that I had just watched the greatest horseracing performance ever.  Secretariat became, well, I don’t want to say “idol”, but I got totally wrapped up in him.  I even named my blue, banana-seat bicycle after him.

In Secretariat’s racing career, he won 16 out of 21 races, and placed or showed in 4 more of those, meaning he finished “in the money” for 20 of 21 races.  That is a racing lifetime of domination.

In the years he was out to stud, I saw a number of specials on him.  Many recalled his attitude, an “attention horse”, if you will.  (Snicker) They say he loved to pose for pictures and would invariably turn toward those holding cameras, standing straighter, ears up.

When ESPN named the 100 Greatest Athletes of the Century, Secretariat came in 35th.  He also appeared on a 33-cent postage stamp in 1999.

When he finally died, in October of 1989 (euthanized due to incurable laminitis) a post mortem autopsy found that his heart weighed 22 pounds, the most ever recorded for a racehorse.

Anyone that ever saw him run could have told you that. 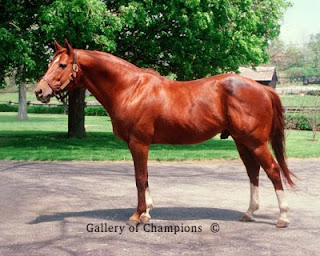