The highlight of Sunday was going to see Rik's son Jake play soccer.  (We saw a game on Saturday as well.)  It went well... Jake's team won 17-2.  It was one of those games where you felt really bad for the other team, especially the goalie.  You could just see the kid wilting out there, like, "I don't care any more, just get me the hell out of here." 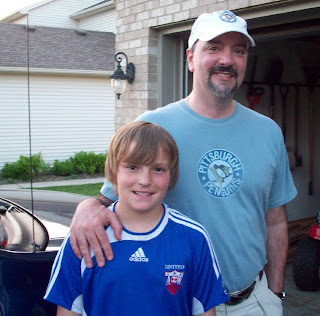 Jake, with Uncle Bluz.  The boy is 10, and is head and shoulders taller than most of the other kids on the field.
We reassembled at home, after a beer run.  (Yes, I know, it was a hard opening weekend).  John's brisket was just coming off the grill. 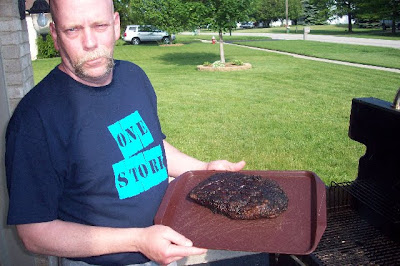 The verdict?  While quite tender and flavorful, it needed maybe one less hour.  But that's not to say that it didn't get devoured.
On Monday, we went out and about, doing some typical small-town errands.  John and I had to pick up some auto parts, so we went to a parts store right beside where I used to work at my first record store. My Peaches store used to be where this Saver and half of Family Dollar stands right now.
We were totally shagged out after that first chore, so Rik met us at another old haunt, Dale's Bar in Maumee. 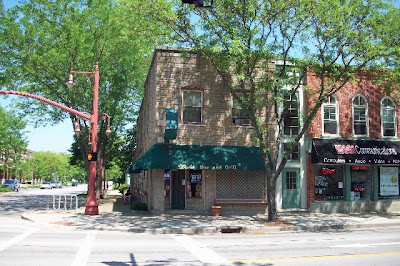 Back when I was in college, my girlfriend was friends with most of a girls softball team and we all used to hang out here after games.  But even before that, I think this was the first actual bar I ever went to.  We used to go for the Genny Pounder Night, i.e. 16 oz Genesee Cream Ale for a dollar. 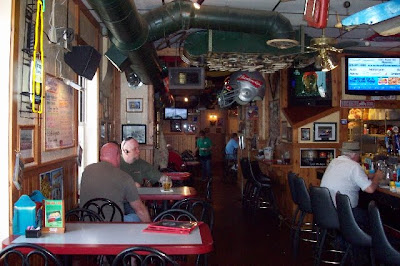 They've changed a lot since I'd last been here... they completely redecorated (meaning they put up decorations.)  It seems to be an Ohio State-themed place now, which was fine by me.  Back in the day, the biggest draw there, (besides the $1 Genny Pounders) was the jukebox.  They used to have a giant jukebox that played 45's.  And they always played in the sequence they were layed out in, so the trick was to see where it was before selecting your songs, so you could choose ones that were coming up soon.  Otherwise, it could be hours before they were played and you would likely be gone.
Side note: Man, I love CD jukeboxes now.  With the old boxes, you were stuck with songs that had to be made on singles... just the "hits."  With the CD boxes, the album cuts were in play.  And yes, I know that there are internet jukeboxes out there... I just haven't spent much time with them.
Back on Friday when I first came into town, John and I passed a sign on the way home, that gave me an idea.  It was the perfect vehicle for a portrait of my buddies, who have been lovingly dubbed, The Bruise  Brothers.  So while we were out in Maumee, I had the chance to get my picture: 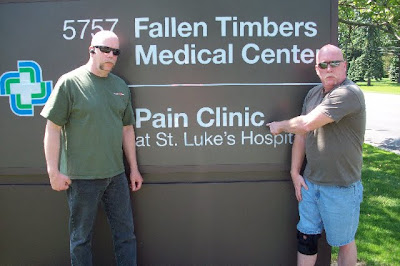 We also stopped at a cigar store; Rik was in the mood for a stogie.  I probably smoke maybe one cigar a year... either when hanging out with the guys, or after a game as a Victory Smoke. The shop was pretty cool... they had zillions of different cigars from which to choose.  Now I don't know jack about cigars, I just look for the word "mild" on the box.  I also look for shorter cigars, because I really don't like smoking.  I just can't get past that "Day-After-the-Smoke Ass-Mouth Taste."  Bleahh...
On the way back home, we passed by my old house.  Years ago, I couldn't even bring myself to look at it... I'd heard there were a lot of changes... trees cut down, additions put on, cars and equipment all over the place.  But a couple years ago, I started looking and saw that it wasn't that bad.  So this year, I had John pull over so I could take a picture. 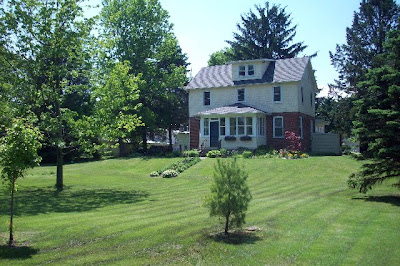 The Olde Homestead.
It looked pretty good.  There used to be 2 giant trees in the yard... I know one out by the road had to be taken down for a sewer line.  There was another huge one that was on the very left of this shot... you can still see the ring where it used to be.  It used to shade the whole house.
We had one more chore to do... We had to follow John out to Haskins so he could drop off a car at the shop. 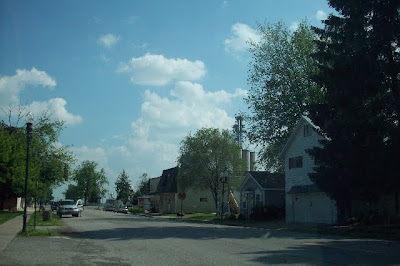 Downtown Haskins makes downtown Whitehouse look like Gotham City.
I used to pass through Haskins every day on my way to Bowling Green, when I was in college.  It was a very good place to pass through; it was "stopping" that could put you in a coma.
But nevertheless, we found a nice place to stop for some more beers.  (2 chores, 2 bars to visit.  I like the symmetry.)
The best part of this bar, Herbie's Train Depot, had one very cool thing: 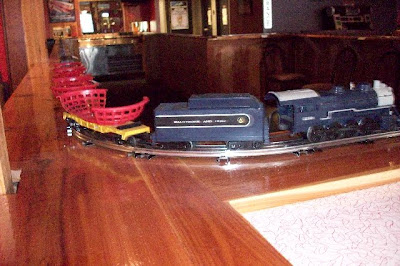 "Train Train!"
They had this model train set up that ran around the perimeter wall, that if you were sitting in the right place, would deliver you your meal.
OK, I admit that I'm easily amused.
Rik helped me a bit in getting that picture... I kept getting a blur and he helped me adjust the shutter speed on my camera, thus earning his keep for the day.  I guess I stopped reading my owner's manual too soon.
On the way home, we stopped in Waterville at the bank of the Maumee River.  I wanted to get a picture or two. 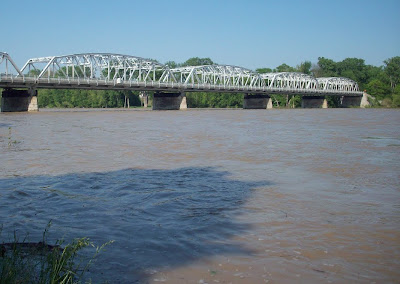 This bridge crosses the Maumee River from Waterville.  (Hence the name, "Waterville.")  I used to cross it every day on my way to school.
Our final leg was to pick up John's dad and bring him back to John's with us, to bring some wisdom to our motley bunch. 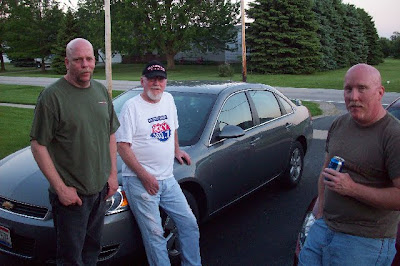 No grilling tonight... instead it was a pot of spaghetti, with which I am completely fine.  The grill will get over it.  Afterwards, we convened the Council of Elders over beer, cigars, and some Jack for John's Dad.
On deck for Tuesday:  Jake's baseball game, and American Idol.
Note:  I don't really give a shit about Idol, but I'm in the minority here.  Plus, finalist Crystal Bowersox is from this area, so it's a very big deal out here.
Thursday we plan to head to Cincinnati and visit my sister.  We also plan to see the Reds/Pirates game, so I may not get to post again until Friday.
I realize that life will continue to move on.
Posted by bluzdude at 1:35 PM

Email ThisBlogThis!Share to TwitterShare to FacebookShare to Pinterest
Labels: Bluz LIfe, The Barn, The Glory of Meat